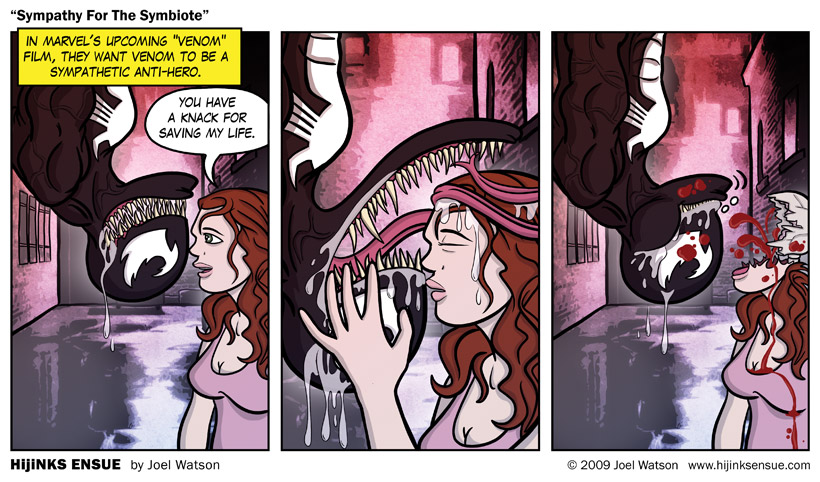 Marvel hired the guy that wrote Seabiscuit to script the Venom movie? Sounds like a shitbiscuit. Hey-ooo!

I started reading Amazing Spider-Man in the mid-90’s and Venom was front and center for most of that time. One thing that sticks out in my head-parts is him constantly threatening to eat someone’s brains. Even the “talking” action figure that came out when I was in 5th grade said “We want to eat your brains!” He didn’t actually talk, but you could pull this strip of red tape through his enormous backpack to make him repeat garbled phrases. It actually sounded more like “WIWACHHHNNTOEEEEEUHHHBRACHCHCHCH!” Anyway, the point is how are they going to turn brain eating alien symbiote into a hero?

I read that Marvel did this in the 2000’s with a few Venom solo titles. I also know that there is little evidence that he actually ATE any brains. According this this CBR forum thread, Venom talked a big brain-eat game but never got around to closing the deal. At one point the symbiote (not Eddie/Venom) was feeding off human brain juice, but it turns out (I shit you not) that the same chemical was found in chocolate so Eddie Brock just kept some Hershey’s bars around to quench his better half’s brain thirst. This little tidbit might make you rethink your zombie survival plan.

I wonder if there was ever a “What if?” type comic where Peter Parker chose to bond with the symbiote permanently. That would have been cool. Speaking of cool, this movie will be the opposite of that. I can feel it in my Spider-sense, which is the sense that warns me when Spider-Man related movies with suck with the proportionate speed and strength of a spider that sucks.

Come see me this weekend if you are in or arround Austin, TX. I will have 3 separate appearances and would like to schedule a reader meetup lunch/coffee/whatever for Saturday afternoon (10/24). More info HERE.

I have added 2 new appearances in November. I will be at the West TX Comic-Con in Lubbock on 11/7/09 and the Dallas Webcomics Expo the following weekend (11/14).

I have also confirmed registration for Emerald City Comic-Con in Seattle, March 13-14.

The service I use for my store seems to have misreported the number of Ultimate Fancy Editions of the book that were sold. Instead of 150 it looks like only 147 were ordered. I’ve spent the last few days frantically checking and rechecking Paypal logs and everything seems to point to my store just reporting the wrong number for no reason.
Bad news: books havent shipped yet because I’m terrified there are missing orders out there somewhere.
Good news: There may be 2-3 more UFE’s for sale soon. I will post on Twitter and the first two to respond will get first dibs. FOLLOW ME to get in on that action.
Other Bad news: When it’s all said and done, someone somewhere may not get an UFE they think the ordered, either because the paypal transaction never went through or some random eff up of the internet. If this turns out to be you I will find a way to make it up to you.