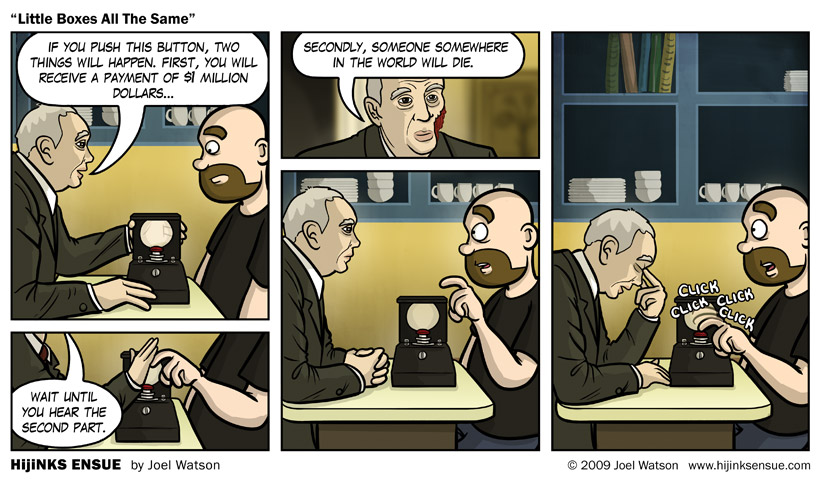 Josh is acting on the theory that the more times he pushes the button the more millions he gets. He assumes additional strangers are dropping dead, but you gotta’ break a few eggs to make a money-omelet.

Watch the trailer for The Box and tell me the movie wouldn’t start and end exactly like this. Based on what I’ve seen The Box is a stupid name for this movie. It should be called The Button, or The Button in the Box, or HOLY SHIT WHAT HAPPENED TO THAT DUDE’S FACE WAS IT EATEN BY A MONGOOSE?!

I hope this movie features my favorite button-related dialog of all time:

How can he possibly resist the maddening urge to eradicate history at the mere push of a single button? The beautiful, shiny button? The jolly, candy-like button? Will he hold out, folks? Can he hold out?

We are currently in the planning stages of resurrecting The HE Podcast. Scheduling was always the problem and it still is. Everyone is too busy. To that end we are working on having one permanent studio (Eli’s house) with all the fancy gear we already own, and one portable studio that can be thrown together at a moment’s notice and used and relatively any location. That will require some new equipment. So while I am trying to sell every computer I own in order to purchase a laptop that can handle the Podcast’s processor and RAM intensive requirements, I have also posted an AMAZON WISH LIST with a few of the items that would make the mobile studio a reality. Namely the two Blue Snowball Mics (which are half price right now) and the PreSonus Headphone Amp. Most of these things are high dollar items, and I’m not saying the Podcast won’t return without them. It’s just part of the overall plan to have this mobile recording capability.

Your generous DONATIONS have completely paid off my first medical bill! 1000 thanks to everyone that donated or sent an email/twitter/etc wishing me a swift recovery. The 2nd bill just came in the mail (from the 12 hour hospital stay) and it’s $1800. I am probably going to do a limited print or some such to raise money for this. If you are interested, stay tuned.

I am also considering offering certain comics as larger prints in the store. Maybe 11X14 instead of 8.5X11. The Calvin and Hobbes/Wash/Firefly comic comes to mind.

Come see me in Austin, TX this weekend. You have 3 chances! [read more]
I am confirmed for Staple! (Austin, TX) and Emerald City Comic-Con (Seattle, WA) in March and I’m lining up new cons left and right. I might also be at San Diego Comic-Con 2010 as well. I’ll let you know if that’s going to happen or not.

Posted in Uncategorized and tagged movies, the box.