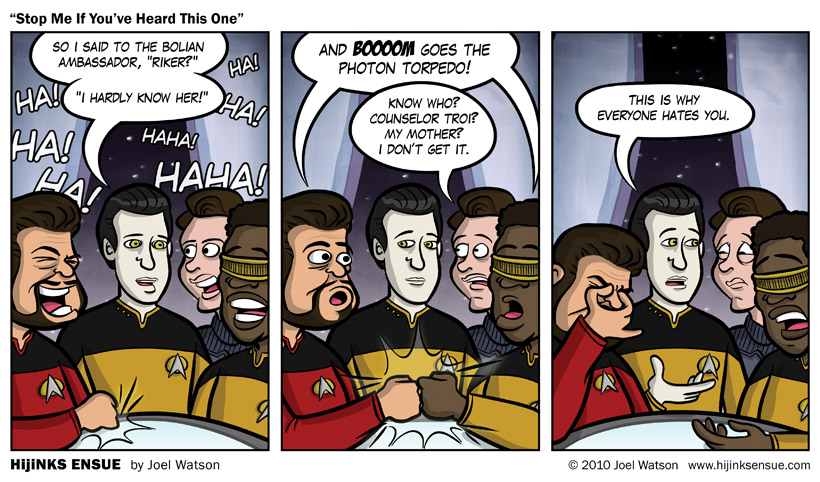 I wrote this comic after viewing the Star Trek TNG episode “The Icarus Factor.” In it, Wesley Crusher throws Worf a surprise Klingon birthday party on the Holodeck, complete with a Painstick Pinnata. Also Riker worked out his daddy issues by beating the crap out of his old man American Gladiators style. What does this have to do with anything? Nothing. I just like making comics about Star Trek.

The actual comic inspiration came from the fact that Wesley clearly didn’t realize that everyone on the ship was punking him when they encouraged him to sneak around and try to plan Worf’s K’Plahmitzvah. Geordi and Data encouraged Wes to pry deeper into Worf’s personal bid-ness despite his obvious increased aggression and agitation. No doubt they were hoping that Worf would remove the young Ensign’s spine through his nipples. Genius he may have been, Wesley just didn’t fit in. He was clearly too young and naive to be gallivanting through the galaxy on life and death missions with cynical space-adults that clearly didn’t have his best interests in mind.

The best line of the episode went to Papa Riker who pleaded with his emotionally blockaded son to “Let your shields down, Wil.” Those are metaphorical shields he’s talking about. Heart shields. The idea of using 24th century metaphors in family arguments lead to these tweets:

So, what’s the best line of shitty space-soap opera dialog you can come up with?

Also, I made some banner art for Denise’s new food blog.