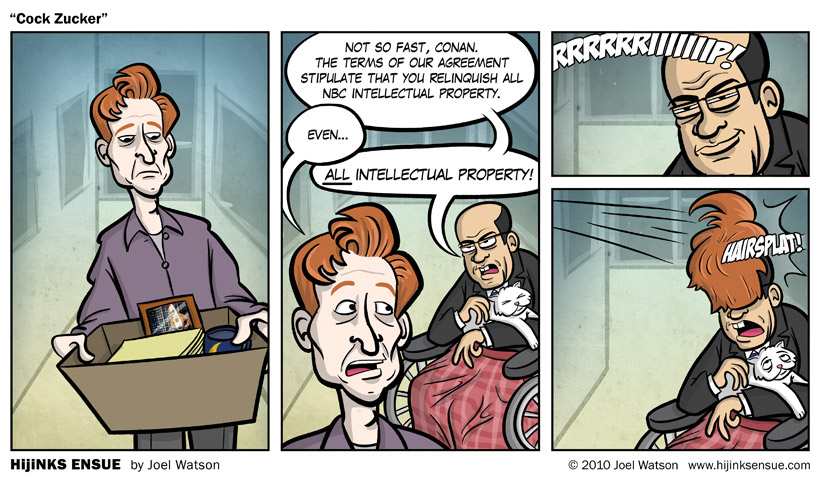 I guess we can all shave off our strike-pompadours [you did grow yours right?] now that Conan has reached an agreement with NBC for an exit strategy. His final show is tonight and I urge you all to watch it live as it airs (no DVR’s) to make this the highest rated episode of The Tonight Show With Conan O’Brien ever. It’s hard to feel bad for a guy that’s going to pocket almost $34 million for NOT working (he must have got that book about free government money from the guy in the question mark suit), but it isn’t hard to see that he wanted the show and not the payout.

Conan has always been a comedy innovator, from his days as a Simpsons writer to SNL (when both of those shows were relevant and funny) to his incredibly weird first few seasons of Late Night. Conan has real enthusiasm for comedy and I respect that. He WANTS to make you laugh. Leno wants to get home at a reasonable hour so he can work on his fleet of classic cars.

Godspeed, CoCo, you fancy Irish bastard. We’ll be waiting for you on Sept. 1 when you announce your new show… or possibly announce that you’ve purchased a small island nation and encourage us all to “go get fucked.” After what you’ve been through in the last few weeks, either option would be acceptable.