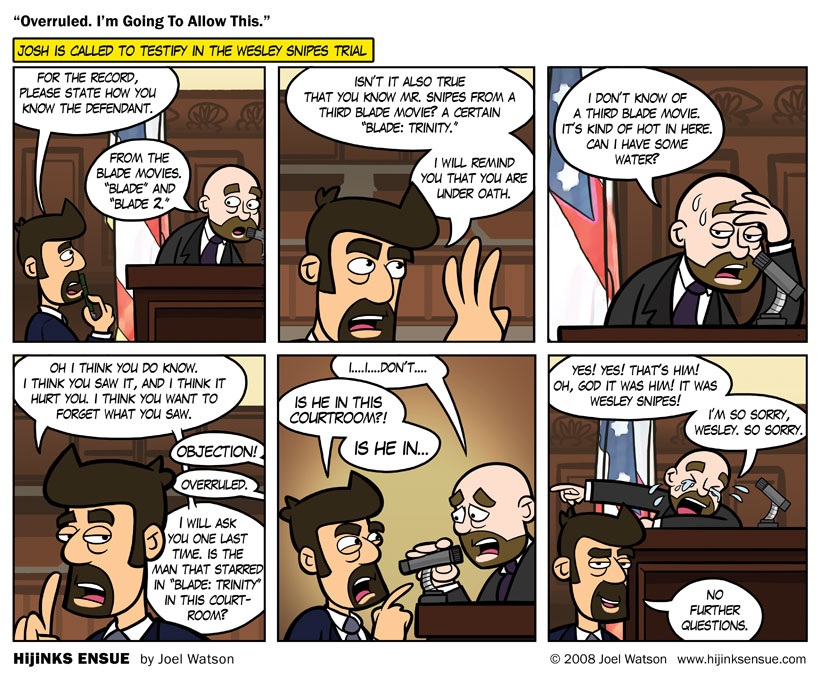 I’ll tell you why Wesley Snipes isn’t going to do hard time for dodging millions in past due taxes. He’s half vampire. The Daywalker isn’t going to prison. He’ll snap the necks of every cop, judge, bailiff and guard between him and the cell, and he’ll do it with his feet. You know why? Because he’d still be in cuffs. Badass. At some point he’d use the cuffs to decapitate a stenographer then, with no running start, he’d jump through a 2 feet window 20 feet up and vanish. They’d never find him again… unless he wanted them to. Ya’ know, for vengeance.

An alternate ending to this comic would be a “My Cousin Vinny” moment where Josh explains that Wesley couldn’t be guilty of starring in “Blade: Trinity” because he was getting high in his trailer the whole time, and accusing everyone of being racist. He’d show proof that for 75% of the movie, Blade is portrayed by a stunt double with Snipes’ head CG pasted over his own. True story. Look it up.

I don’t personally think Americans should be required to pay as much of our income to the government as we do. Especially considering how frivolously and on what it is spent. But I do know that if I don’t pay my taxes, there will be consequences. But Wesley Snipes lives in a world (an “underworld”) of swords, fangs and leather body armor. Why should he be subjected to the laws of man?

I really wanted to do a comic where the IRS try and strike an uneasy truce with Snipes to help them hunt down the mutated IRS agent that can unhinge his jaw sideways and who feeds on other IRS agents. Actually you could just watch “Blade 2” and pretend all the vamps are with the IRS. Come to think of it… just watch “Blade 2.”