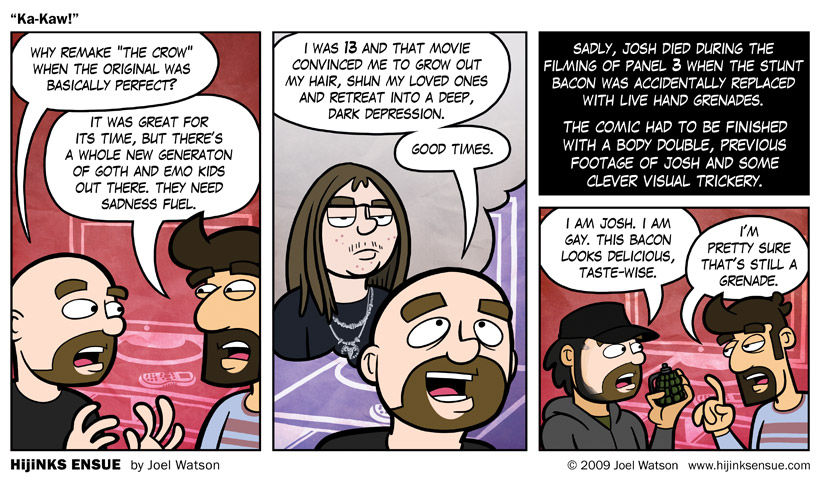 James O’Barr lives here in Dallas. I used to work with a guy who’s best friend was his handler… err… assistant. Regardless, the story depicted in the pixels above is actually mine, not Josh’s (but someone had to die and it wasn’t going to be me). “The Crow” really was a pivotal milestone in my young geek development. It was this confluence of comic books, violence, darkness, depression, grunge music, counter culture and anti hero that simultaneously fired off every synapse in my 13 year old boy-brain. I know it’s not a cinematic master piece. “Right place, right time, right emotionally withdrawn kid” is all I’m saying.

Add to the various levels of awkward, outcast kid appeal the fact that the star, Brandon Lee, died during filming when a stage gun was accidentally loaded with live ammo and you have added a layer of all-too-real tragedy, martyrdom and general spookitude. Not to be disrespectful to Brandon Lee (his performance was fantastic), but he died tragically playing a guy that died tragically. Teen angst feeds off that kind of stuff.

I discovered, and latched on to the movie LONG before I ever even saw the actual comic. I knew it was out there but at the time we were all too young to buy it (spoiler: it contains bewbs). When I finally read it in my latter teens, I was certainly impressed with the beutiful artwork and (can I use this word again?) TRAGIC love story, but the shift in style from Kurt Cobain to David Bowie caught me off guard. Now that I’m older, I wish they had actually let Bowie star in it. It would have been “Labrynth 2: Jareth’s Rock and Roll Revenge.”