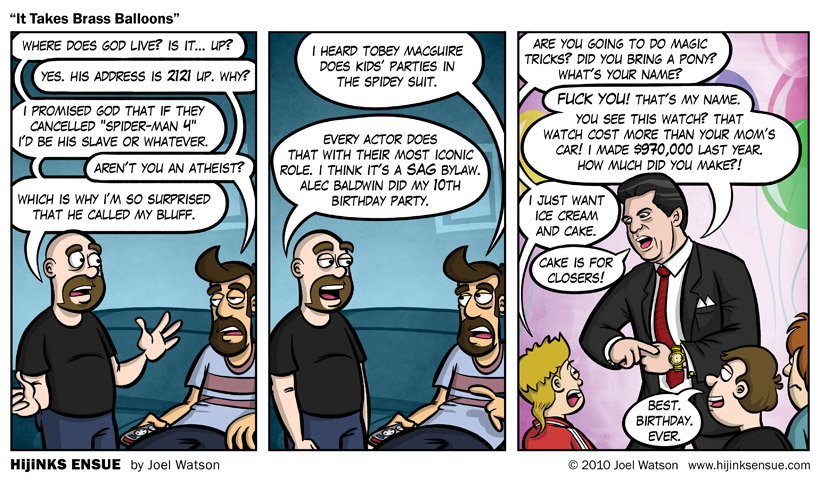 IF YOU ENJOY THE COMIC, PLEASE CONSIDER A SMALL DONATION. THANKS!

“We’re adding a little something to this party’s Pin The Tail On The Donkey game. As you all know first prize is a Sega Genesis. Anyone wanna see second prize? Second prize is a set of POGS. Third prize is you’re fired. Get the picture? You laughing now?”

“Wait. Fired? Like From the Party? Or the family?!”

As a True Believer[TM] and a lifelong Spider-Man fan, I only feel relief at the mercy killing of most recent Raimi/Macguire Spider-Man movie. After Spider-Man 3 (which was so turdtastic that I started a webcomic just to bitch about it), I really have no interest in any continuation of that particular franchise. I swear if I ever meet James Franco I’m just going to punch him right in the head. He should know better. Shame on you, James Franco. A thousand times, shame.

Tobey Macguire has actually done kids parties in the red and blue suit. What other actor/role do you think would make for great childhood birthday memories/future therapy sessions?

BONUS QUESTION: What do you want to see in a Spider-Man film franchise reboot?

ALSO! There’s a familiar character in this “Truly Epic” comic.