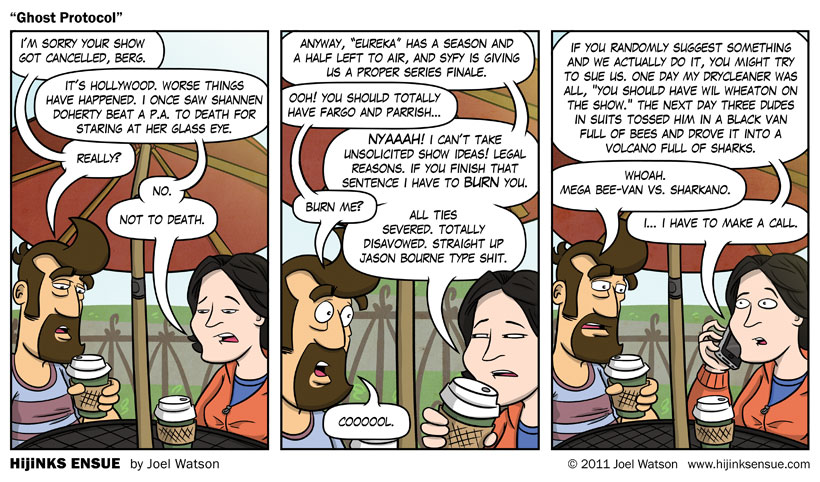 The newly relaunched HE Store is up and running over at Blind Ferret. Please go check it out and maybe buy a book or a shirt or something. Shirts will begin shipping soon.

After getting rave reviews for season 4.5, shooting all of season 5 (to air next year) and getting picked up for at least a 6 episode 6th season, Eureka got up-picked up and cancelled. Normally I would nerd-rage against SyFy or its parent company NBC/Universal or their new parent company Kabletown… err, Comcast for being short sighted or too focused on profits at the expense of quality, but this time it’s a little different. This is the first prematurely cancelled show I’ve enjoyed  where I’ve had multiple friends working on said show. Amy Berg, pictured in the panels above, is the co-executive producer and a writer on Eureka, and Wil (as most of you know) plays Dr. Issaac Parrish on the show. So instead of spitting indignant geek venom all over the internet, I’ve decided instead to focus on my friends, the great show they’ve created and what they’ve (we’ve) lost.

At San Diego Comic-Con this year I went to the Eureka screening with Amy and our friend Dammit Liz. As we watched the never-before-seen episode I found myself getting nervous. What if the crowd didn’t respond well? What if I didn’t laugh enough? The lady right next to me made this show! Luckily the crowd loved it, and lack of laughter was not an issue. It was a great episode and I thoroughly enjoyed it. Still it made me realize that geek TV was starting to fall off of the unattainable pedestal I had always kept it on. Sitting next to a television writer as she laughs at her own show then criticizes the use of high heels in an action scene where high heels would have actually caused the character to die was sobering and served to humanize the whole experience.

The show was larger than life (especially since it was being projected on a 50ft wide screen), but at the same time it was very small and personal. I was surrounded by the crew that worked on the episode and I realized I had never before seen a TV show reflected on the faces of the very group of people that made it. Immediately afterward I turned to the writer, Ed Fowler, and congratulated him on a job well done. TV had never really been this accessible to me. After the screening the writers and crew gathered outside the hall for a congratulatory huddle and group hug. They were proud of their work and proud of each other. That experience is why I’m viewing the cancellation of Eureka differently than say, SG:U or Terminator: TSCC. I loved those shows, but all I knew of them was the finished product. The gloss and polish. Thanks to Amy, Wil, Ed and the other Eureka crew members I met, I see this show in a different light. I feel like instead of a show being cancelled, a family is being broken up. I realize that is not a unique occurrence within the Hollywood machine, but it was the first one I was even tangentially close to and it saddens me.

Still, fans of Eureka do have some 19 or so episodes to look forward to. That is probably the longest run for an already cancelled show that you have ever gotten or ever will get. At least it gives us time to get used to the idea. And at least Syfy IS giving them one extra episode to wrap things up. My guess? Eureka is purgatory and they’ve all been dead the entire time.

COMMENTERS: DO NOT SEND ANYONE FROM EUREKA YOUR IDEAS/GUESSES FOR THE FINALE!!! THEY REALLY DO HAVE TO BLOCK YOU IF YOU DO! NO JOKE. Still, I bet you could post your ideas here, on my site and nobody would get in trouble. Probably.