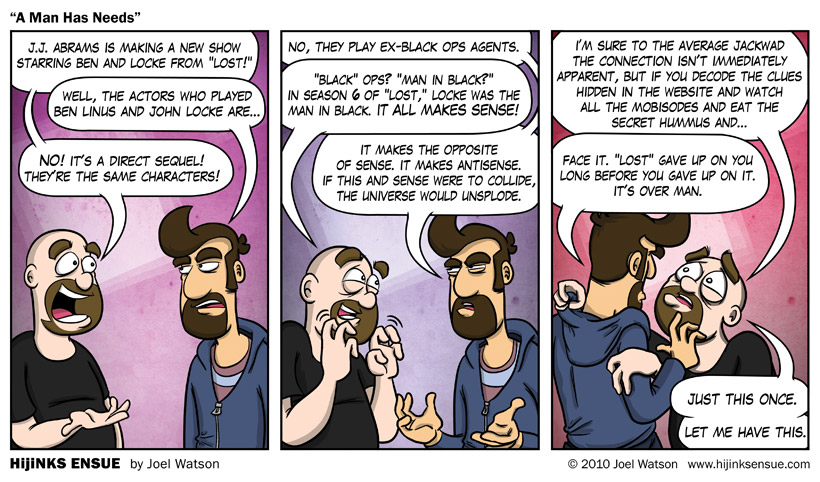 This Wetworks pilot from J.J. Abrams (starring Michael Emerson and Terry O’Quinn) probably isn’t trying to be the next LOST <cough>FlashForward</cough>, but the connection to the geek-favorite frustration bonanza is certainly part of the potential appeal. I would be more likely to watch it if in every episode Michael Emerson gets the crap kicked out of his crap-bag and O’Quinn does that orange peal smile thing. You know, just as a nod all the fans.

Abrams is a busy man. In between buying my Groverfield shirt over a year ago (did I tell that story already? I did? Oh, I tell it constantly? Oh.), executive producing Fringe and Undercovers, directing Star Trek 2 and Mission Impossible 4, and producing Cloverfield 2 and Super 8 he still has another 15 projects in the works. And did I mention the thing with the shirt? He might be our generations most prolific geek. Or perhaps he knows something we don’t know about the end of the world, and he wants to get as much geekery in as possible before some sort of cataclysm. Did I say anything about the shirt yet?

Speaking of Fringe, holy crapternate (the alternat universe version of “holy crap”) was the season premiere stellar! Again, Fringe is the best sci-fi on TV and you should blow through the sort-of-stumbly season 1 to get to the oh-so-goods of seasons 2 and 3. Fringe‘s only flaws are that there are times when it isn’t on and that it can’t love me back.