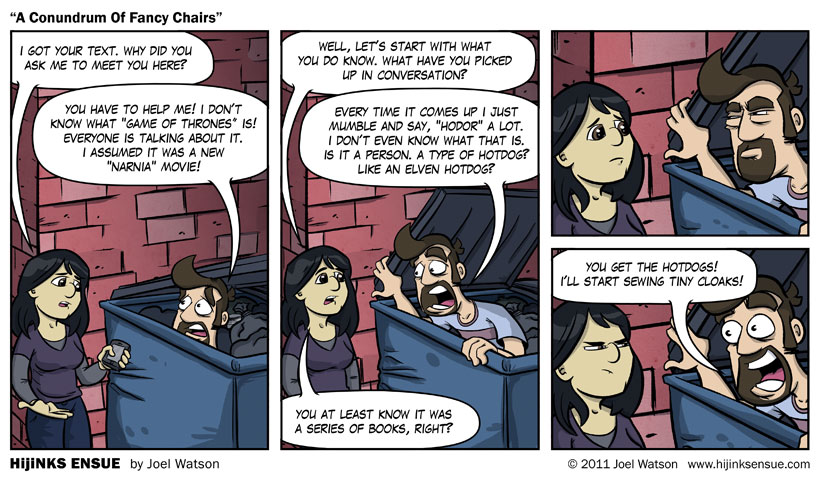 What I know about Game Of Thrones: It’s an HBO mini-series based off a very popular book series by George R. R. Martin (I assume that’s a Tolkien reference) and all geeks seem to love it.

What I do not know about Game Of Thrones: Anything else.

I can tell this is going to be my new Harry Potter or Doctor Who, where it’s the geek franchise that everyone can rally behind with near universal geek adulation, but I end up 5 years late to the party.

I don’t even have HBO… though excuses such as that don’t seem to really hold up when you’re a motivated internet-type individual.

COMMENTERS: Feel free to discuss the first episode in the comments. I will use your words to further pretend I know what’s going on when this show comes up.

You can now order a “The Doctor Is In” shirt based off the “You’re The Last of The Time Lords, Charlie Brown” comic. It comes in blue or brown. So go check out the site, read the initial blog post and order you some wearable geekiness that will illicit awkward stares.

[Side note: I was up for 30+ hours straight between Sunday and… I guess Tuesday working on the site, getting it working/ready to go, etc. so I am horribly behind on comics at the moment. I appreciate your patience.]