Oh hey! It’s Eli’s wife, Denise. We haven’t seen her in… a couple of years? I almost considered her lost in the partial reboot a year ago, but let’s just assume she’s been in the Philippines studying at the finest culinary schools, learning how to prepare live baby ducks that you eat whole or soup made of blood and bile.

This is how my wife and I watch Game Of Thrones. I pause the TV every 15 seconds to ask her questions and she looks at me with this knowing glint in her eye like, “Oh shitbaskets you have NO IDEA what’s about to happen.” It’s like she’s a time traveler returned from one of many possible futures just observing and laughing as we (the past-folk) run around and play out the events of her history, seemingly devoid of free will. It’s an unsettling way to watch TV to say the least.

Couple this with the fact the Game Of Thrones doesn’t consistently rewrite, leave out or work around plot points from the book and the whole experience can be rather frustrating. What I mean is sometimes they’ll lump a few key events into an episode by having them all take place in the same area or at the same time and to one guy instead of the 8 guys on 9 different continents they happened to in the books. Other times they’ll just leave out extremely vital information, either assuming you know it already, having read the books, or you’re so confused by everything else that one more thing to be confused about isn’t going to make much difference. Still there are other times where they completely rewrite events, characters or entire plot lines from the books to make for a better TV show. This final stratagem is the one I prefer. I’d rather the show be a unique experience that neither requires or punishes having read the books.

COMMENTERS: What are your favorite/least favorite movie/TV translations from books? Do the most faithful translations make for the best adaptations or do you prefer the ones that take more liberty and consolidate the story for the new format? Have you ever been the “one who read the books?” Did you aid or ruin someone else’s movie/TV watching experience because of it? 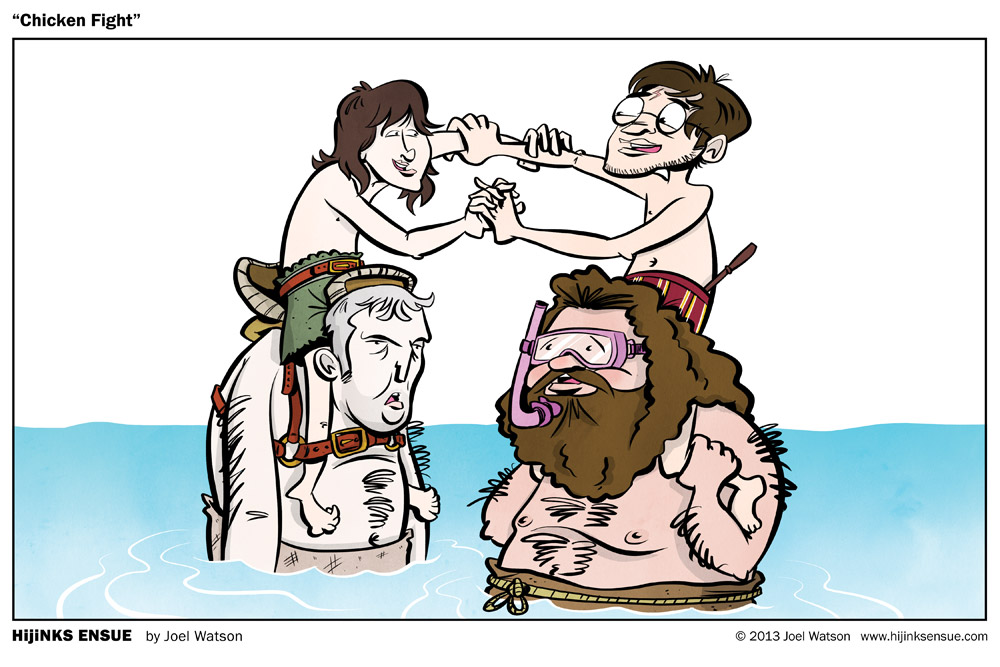 I was going to draw Hodor and Hagrid carrying their respective semi-motionless boy-bodies around, but I decided they should be having a bit more fun.

COMMENTERS: Who are your favorite fictional duo or team to fall into the “behemoth and small person” trope? I can think of tons of examples from comic books proper, but not that many from film and TV. Maybe you recall some obscure one’s that I don’t.

That title should actually be, “The Loouphoule.”

TOP SECRET INFO: You can get a print of any HE comic ever by clicking “Buy A Print” under the comic, or by going here.

Did you know if you catch a real live Canadian they have to show you their Indentattoo which, in turn, reveals their true name and spirit animal? Once you can call a Candian by its true name, it must obey your every command. Unless you command it to commit murder, or be rude in public. Then IT CONTROLS YOU! The good news is, it will often express mild irritation at your capture and enslavement of it, but ultimately wish you well and attempt to find its way home. Canadians can always sense true north because of a naturally occurring magnet found in their skulls. Up until the late 1800’s, these “bone magnets” were highly sought after by American hunters, trappers, golfers and tennis players for their perceived effectiveness in pseudo-science carpal tunnel bracelets.

I am quite literally bursting with true facts about Canada. I’ve been there at least 3 times, which makes me an expert. I’m going back again next month for Calgary Expo and to get recertified as an official Canada Expert First Class. I’ll be at booth 925/1025 with Blind Ferret.

One more comic and this story bit ends. Game Of Thrones comes back this Sunday, and I’m struggling to remember who is dead, who is currently actively being killed and who is merely mortally wounded. I need to make a chart. A blood chart. My wife has read ahead in the books which has transformed her into some kind of fire witch with the curse of foresight. She isn’t to be trusted.

I need to go write a foreword for my friend’s book.

COMMENTERS: Have you ever been catching up on a popular tv or movie series while your spouse, significant other, friend, etc. has already read all the books? Did it augment the experience for you, or were they all, “OH MAN OH MAN OH MAN YOU HAVE NO IDEA WHAT’S ABOUT TO HAPPEN OMGOMGOMG!!!” all the time? I made the ENORMOUS mistake of assuming I would never care about Harry Potter, so I forced my old boss to explain the entire plot to me, including who killed Dumbledore and that Harry was the final Horcrux, thus robbing me of the excitement of finding those things out for myself when I eventually fell in love with the series.

Wrapping up this short storyline this week, assuming Game Of Thrones premiers this weekend. I’m pretty sure it’s this weekend, but I was also pretty sure yesterday’s date was somewhere around the 20th (SPOILERS: it was the 26th), so I have apparently lost a little time due to staying up all night watching mediocre movies (moviocres) and thus I have become an unreliable judge of when things are and are not.

COMMENTERS: Have you ever purposefully deprived yourself of something that, while not life threatening, probably wasn’t that good for you? Did you succeed? Have you had any self-imposed restrictions that might seem silly to others? No Hot Pockets on odd numbered days? No dating people you met during a hostage crisis? No driving past the home where you murdered that transient? That’s just goofy. Transients can’t haunt you because they don’t have souls.