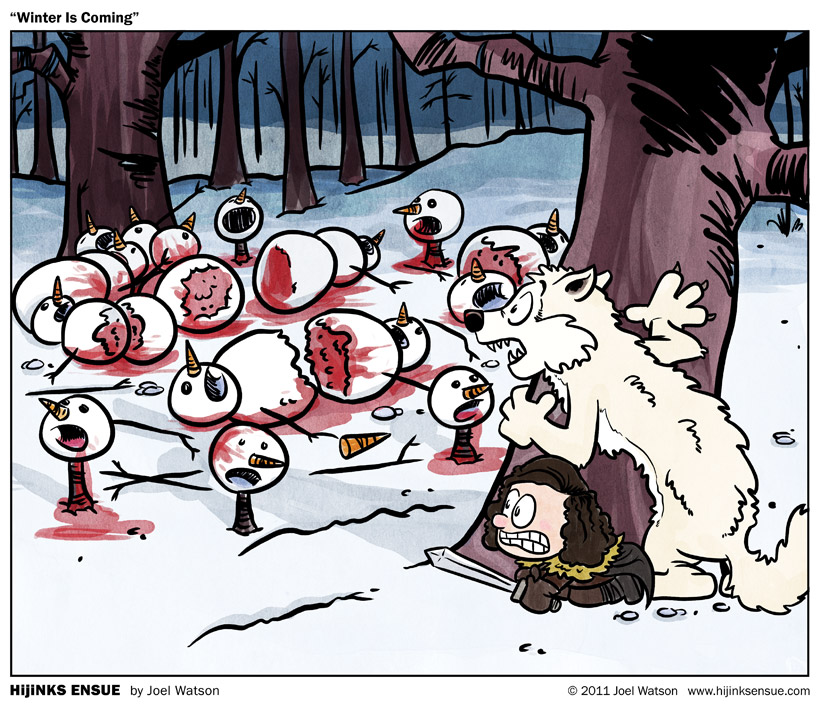 UPDATE: “Winter Is Coming” shirts are now IN THE STORE!!!

I’ve been tossing this Calvin and Hobbes meets Game of Thrones idea around for a while. Originally it was going to be Calvin/Jon Snow and Hobbes/Sam standing atop the wall mirroring the dialog from the final Calvin And Hobbes strip, ending with “Let’s Go Exploring.” As I was doing research for reference images I came across the cover to the Attack… collection and realized it was basically already a scene out of GoT, complete with a White Walker and everything. So there you go. I hope you enjoy it.

We have had a really fantastic Fancy Bastard meetup each year. Details HERE on G+ or talk to FB Adam (who is organizing it) directly on G+ or Twitter. Hope to see you at the show and the meetup!

Commenters: Please come up with your own Game Of Thrones/ Sunday Comics crossover and let us know how it plays out. I’ll get you started: The Family Circus as the Lannisters. Jeffy = Joffrey? Right? Amirite?

UPDATE: You asked for it, so I added a “Winter Is Coming” desktop to The Vault. I’ve also added “Chibi Wolverine” and “Three Wheaton Moon” desktops as well. Just make a donation of any amount, or sign up for a recurring donation subscriptionand you’ll get access. I’ve also added mobile versions of these desktops HERE.