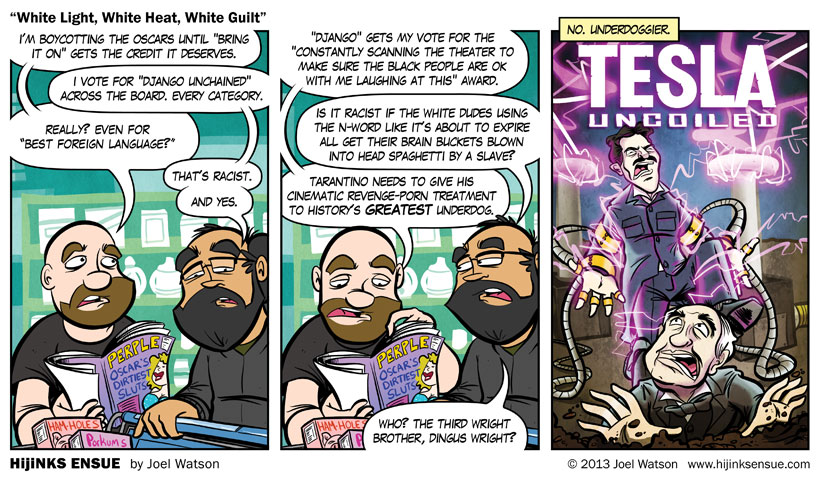 UPDATE: Get a print of panel 3 of this comic HERE!!!

CRUISE FUNDRAISER UPDATE: All 100 “Bridge Collapse prints are sold! Woohoo! They arrive at my house this weekend (a week later than I anticipated) and will start shipping Monday the 20th.

I made a new eBook/iBook! It’s called “Sorry I Ruined Your Book Vol. 1” and it has over 180 pages of HE book 1 preorder/artist edition sketches with commentary on every drawing! Donation subscribers get it free and it’s also available to anyone for a one time “pay what you like” donation.

I had a reader tell me via twitter he was unaware that I had a store where I sold T-shirts and books and such. WELL I CERTAINLY DO.

I absolutely loved Django Unchained. Call it a base, animal reaction, but I really do enjoy seeing histories most egregious hatefucks getting served violent and almost comically gory revenge. I’m not super gung ho on cinematic violence, but how can you argue with Jews carving up Nazi’s or freed slaves cutting a swath of recently face-exploded slave masters across the South? (I guess you could argue plenty if that’s just not your bag, but it certainly hits the spot for me).

Django Unchained is a Tarantino film if there ever was one (Spoilers: There was. There was a few, actually… WERE a few. A couple of them were good.). It’s backdrop is a terrifyingly hateful period in American history and deals with some of the most unpleasant subject matter humanity has to offer, yet wraps all of that in pleasingly witty word choices, top notch performances by all and an L.O.L. (laughables outed loudly) level of cartoonish violence. Jaimie Foxx was surprisingly effective as, Django, the slave turned bounty hunter. I say “surprisingly” because, for the first few minutes he’s on screen you wonder if this movie is somehow below the Ray Oscar winner’s station. It isn’t. The movie and the actor simultaneously rise to the occasion once it gets going, and they continue to compliment each other for the duration.

That said, Foxx is not the star of the movie. Christolph Waltz, just as he did in Inglourious Basterds, STEALS the show. I was wondering if I would be able to see him as the hero, Waltz having so permanently cemented himself as the villain in his previous Taratino collaboration. If you loved to hate him as the monster of the Third Reich, you’ll love him even more as the German dentist who assassinates bad guys and sells their corpses to the government for profit. German Fancy Bastards who has seen the film will have to tell me if Waltz was doing a certain regional German dialect that I am unfamiliar with or just annunciating like a funny little German elf might. Either way, it was delightful. I could listen to that man oddly pronounce words all day.

DiCaprio did a fine job, but I felt his was the part that could have been played by nearly anyone and the movie wouldn’t have suffered. There’s just something about him that I never quite buy into, especially when he’s doing a crazy accent (which is nearly ALWAYS). Couple this with the fact that he was CONSTANTLY upstaged by Samuel L. Jackson’s doting Uncle Tom-esque house servant character and you have a performance that neither detracted or particularly added to the overall film.

Overall it was a very satisfying movie. It’s an action film, a revenge drama, a bit of a heist-flick or con job, a love story, a comedy… it covers all these genres, yet never feels unfocused. I will say that if you are squeamish about hearing the n-word oh… I don’t know… A THOUSAND TIMES, then this isn’t the movie for you. I know Tarantino has taken some flack for trying to make a movie about racism and slavery without somehow sidestepping all the racism and slavery. I’m not sure how he was supposed to do that, but I do not feel the end product was exploitive to anything other than the concept of a Spaghetti Western. Each of his films is a love letter to a certain genre of cinema. Some hit home better than others, but Django is the first “Best Picture” caliber movie he’s directed.

On a side note, every time I hear “Django Unchained” I think about Picard and that Tamarian captain in “Darmok.” Oh, and Thomas Edison is just a slimy ratcock of a villain. Fuck that guy. Seriously.