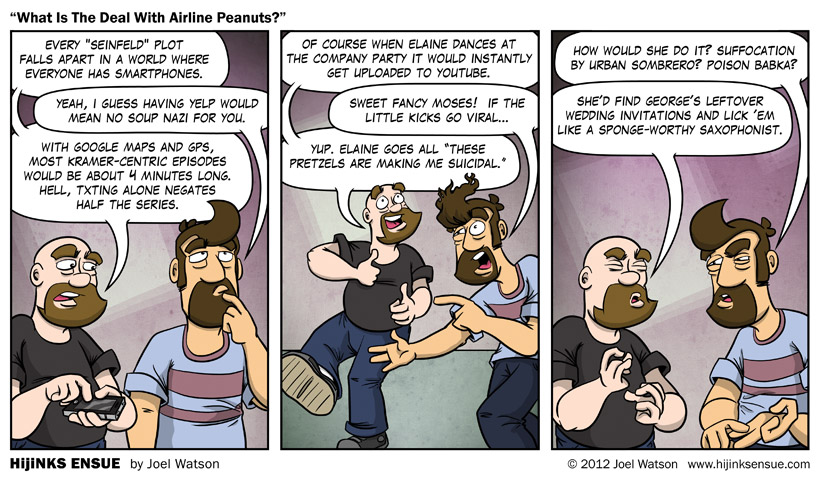 While I wait for TBS to complete its inevitable transition into the “24 Hour Seinfeld Rerun Network” I satiate my need for unlikable characters dissecting the minutia of the human experience with the paltry 3 to 4 hours blocks of daily programming they currently provide. Seinfeld is one of those shows, like Newsradio, that I find to be infinitely rewatchable. Last week I was about 3 episodes deep into a Seinfeld binge when it dawned on me that nearly every premise, every complication, every problem these characters experience has been rendered moot by the modern smart phone.

Take the exact same characters and pose them with the same situations in 2012 and each episode would be about 4 minutes long, if not zapped out of existence entirely. “Are you sure we’re going to the right movie theater?” Check Elaine’s original txt, then Google Map it. “Where did I park my car in this parking garage?” Pardon the phrase, but there’s an app for that. Couple in the Hamptons wants you to see their ugly baby? Check the photos they posted on Facebook before you bother making the trip. Have you ever stopped to think about how much of Seinfeld involves getting lost? Or just not having access to a specific piece of information? In the age of the smart phone the show basically becomes the story of 4 extremely organized friends who rarely miscommunicate, have misunderstandings, or get lost.

If you examine this idea deeper the whole concept of Seinfeld really starts to unravel. Jerry, as a comedian, would never waste his witty lines on George when he could post them to his 150,000 Twitter followers. Eventually he would sell a sitcom to CBS based on his popular @ShitKramerSays Twitter account. George would be able to more successfully impersonate a marine biologist, an architect or even an importer/exporter having constant access to Wikipedia. As for “the contest,” well… for four sex-obsessed narcissists with constant access to pocket-pornography and 4G data connections, I don’t see any of them ever proposing this bet or having any interest in participating in it.

COMMENTERS: What other Seinfeld plot ideas fall apart when you add smart phones, or even the Internet to the equation? What about other classic sitcoms? Assuming they were trying to make Seinfeld today, what modern minutia would Jerry obsess over? Maybe the girl he’s dating posts too many cat pictures on Facebook. Or maybe she posts AS HER CAT. Would Kramer and Newman start one failed e-business after another? Would George freak out that his parents read his Twitter?