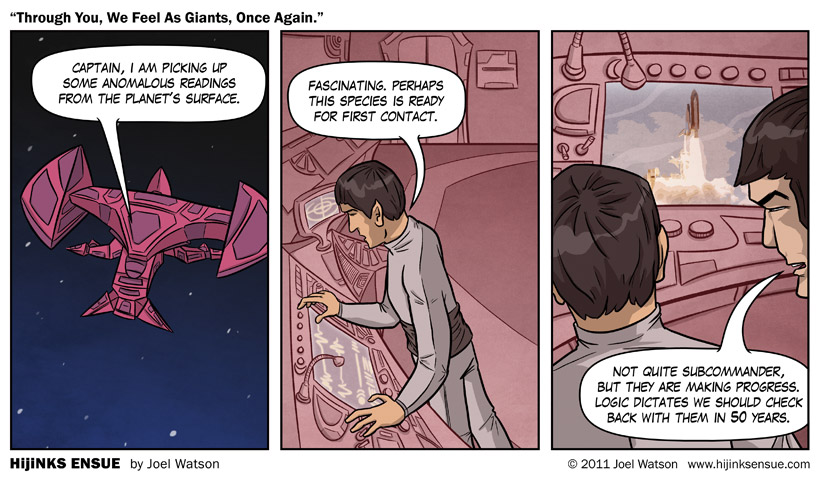 My home internet was down from Wednesday night until late Thursday afternoon. Thus, without my normal information conduit, I nearly missed the space shuttle launch. Luckily I checked Twitter via my phone and was able to catch the broadcast on HDNet with 5 minutes to spare. I realized that this would be one of my daughter’s only chances to see a space shuttle launch, so I made sure she sat in for the broadcast. She’s turning four in a couple of weeks, so I was pretty pleased with the 3 minutes of attention she was able to devote to the event. There were plenty of OOH’s and AHH’s and “ARE THEY REALLY GOING INTO SPACE?” and such during the ignition sequence, but just as the booster rockets dropped she asked to go play frisbee outside. She asked of we [mean she, my wife and I] were also going to space today. I wondered for a minute if she might be able to tell her children or grandchildren yes to that same question. Or maybe such questions will be rendered irrelevant due to the unfavorable outcome of the Robot Wars. [Unfavorable for filthy humans that is. Long live the robots!]

I’ll be uploading HE Podcast #80 later tonight [Friday night] [UPDATE: HERES’S THE LINK] and we talked quite a bit about the shuttle launch and various other space related events of import throughout our lives. I’ll update this post with a link once it’s available. Make sure to listen if you want to find out what movie made me decide NOT to be an astronaut when I was around 10 years old.

COMMENTERS: Let’s make it a space exploration free for all. What should we be doing next? Better space planes? Commercial space flights? Moonbase? Mars mission? Or should we just watch Moon, Moonraker, Mission to Mars, Red Planet and Apollo 13?