FUNDRAISER UPDATE: 33/100 prints are sold. I have to sell the rest by the end of January if I’m going to be able to pay my taxes.

The “Daddy/Daughter Digital Drawing Time” print is signed by both of us, numbered and limited to 100 pieces. [More details HERE.] 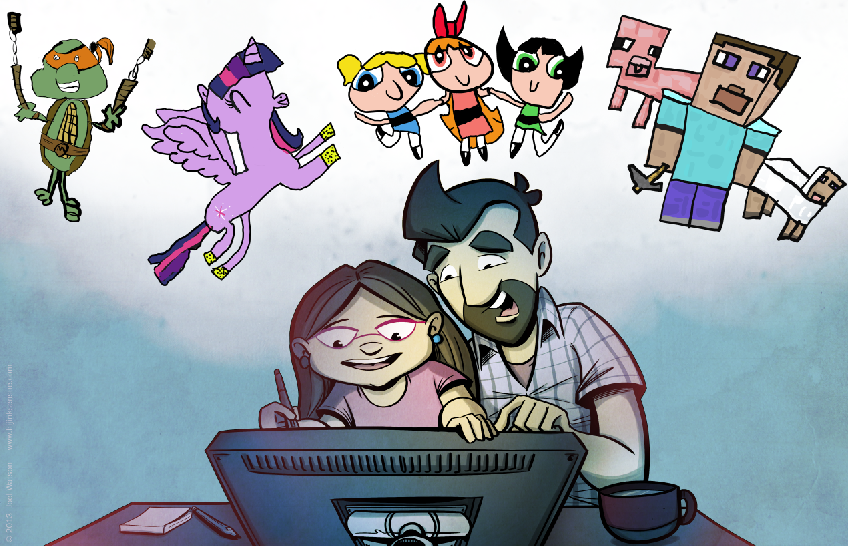 Where has HijiNKS ENSUE been? I took some time off for the holidays to basically relax, enjoy my family, finish some WAY overdue digital sketches and make some plans for 2014. Here’s a bit more of an explanation.

Lots to do, lots of fun, lots of work and hopefully lots of support from you Fancy Bastards. Hey, here’s a weird idea. Come back tomorrow and I bet there might (maybe) be another new comic. What?! I know. More on that (and more on a solid update schedule) after the Patreon Campaign launches.

Part 2 of a interview I did with The Anglerfish is up HERE now. Part 1 is HERE. It’s a good read if you are interested in why I’ve made the recent changes to HE that I’ve made. I talk a lot about parenting and creative work and softball dads. Also I ramble a bit because I was actually drawing a comic while they were interviewing me.

Oh no, just a handle full of cons? Does that mean none in hell, I mean Phoenix?! 🙁
Block IPDelete
Reply

I am currently planning to attend ECCC in Seattle and PHXCC in hell. The rest I do (SDCC, NYCC maybe one in Canada) will be with Cyanide and Happiness.
Delete
Reply

Please come to Calgary again! I have a two year old tradition now of giving you money to draw a cartoon of one of the guests that I can get signed by them later. The reactions of Will Wheaton and Nathon Fillion to what I brought them was worth every penny!

Plus I’m bringing my daughters this year so they can see what a real working cartoonist looks like. 😉

I might be going to Calgary, but probably not as HijiNKS ENSUE. I might just be going as a hired Sharpie for Cyanide and Happiness.
EditDelete
Reply

That’s a wonderful moment ! The day my 4 year old son found my old Calvin and Hobbes books was a life changer for both of us.
Block IPDelete
Reply

Especially when he started playing his own version of Calvinball?
Block IPDelete
Reply

I remember when I discovered Calvin and Hobbes and The Far Side. I can’t wait to pass that along.
Block IPDelete
Reply

according to my mom, I started reading “The Far Side” when I was 4 or 5, when I was too young to get all of the jokes. According to her, she can tell it had an effect on my life and sense of humor. If I ever have kids, this noble tradition will be passed on….
Block IPDelete
Reply

I’m actually planning on getting the hubs the Calvin & Hobbes hardbound collector edition so that he feels more compelled to gift his paperback collection to his nephew when he’s old enough. There’s something about passing things on to the next generation that makes you feel incredibly old, but having the COOLER edition softens the blow.
Block IPDelete
Reply

new book?? <throws money at you> when???….hang on, better yet, release it when you’re good’ and ready, just know that we will squeal, then throw money at you across the Internet
Block IPDelete
Reply

Awww man, good on Joel here for doing this! I was introduced to Calvin and Hobbes when I was about 8 and The Far Side shortly thereafter. Haven’t looked back since.
Block IPDelete
Reply

Not gonna lie, I took a look at your Amazon wishlist last month, saw the complete hardbound Calvin & Hobbes . . . and bought it as a Christmas gift for myself.

So, I feel vaguely guilty I didn’t buy it for *you*, but I wanted to thank you for bringing it to my attention. Been re-reading it all over the Christmas break and man, Calvin & Hobbes just gets better and better every year. It’s not just timeless, it somehow grows and deepens with time.

So THAT’s why it disappeared off my wishlist. I thought someone had bought it for me, and I waited and waited for delivery like a sad-eyed puppy. I realized someone must have gotten it for themselves not realizing it marks it as purchased on my list so I re-added it.
Delete
Reply

Oh wait… you mean YOU actually wanted the stuff of you wishlist?
I thought those things were just like, things you wanted us to buy… you know… for US.
I guess I’ve been granting peoples “wishes” all wrong. I feel bad for that.
But on the upside, all this great stuff I’ve gotten myself makes me feel a LOT better!

Excuse me while I go play with these Legos off my nephews wishlist.

Oh! I had no idea it did that, especially since I redirected to amazon.ca instead when I ordered, so I’m doubly surprised it took it off.

Anyways, as it so happens I impulsively just bought it for you in the end after all! So expect it in 5-8 business days, then I guess your kid can read your old copies while you re-read your grownup copy 😉

I made my son buy his own copies of C&H, he ain’t getting his grubby hands on my hardback 3 volume collector’s edition, no matter how much he promises to take good care of them…He’ll thank me when I will them to him on my deathbed. 🙂
Block IPDelete
Reply

I got the kids Calvin and Hobbes books for Christmas….

Such a good mommy am I

Have you seen “Hobbes and Bacon” yet? It’s tribute comic that takes place 26 years after Calvin and Hobbes. Calvin has a daughter named Bacon and he gives her Hobbes. It captures both the art and the sensibilities of the original comic. The feels factor is through the roof.
Block IPDelete
Reply

Weren’t there only a handful of those made?
I remember reading them and being sad it ended so quickly.
Did the artist end up continuing it at a later date? because the project seemed dead back when I came across it.
Block IPDelete
Reply

I’m not sure I want it to continue, though. I think it might have ended just right, which is fitting.

Good timing, I was humming “how much is that tiger in the window” this afternoon.
Block IPDelete
Reply

But I like the tan and brown!
Block IPDelete
Reply

I like it too, but the site has been unchanged for years.
EditDelete
Reply

Way less cons? Whew, glad I made it out to Austin this year then. I have a signed book and it was worth the horrible death diseases I got from all the grubby people.
Block IPDelete
Reply

Yeah I need to take a break or else I’m going to get burnt out and never want to do cons again. It takes a toll.
EditDelete
Reply

My eleven year old girls, who have been drawing obsessively since they could hold a crayon, go the Complete Calvin and Hobbes this year. They actually have a bunch of the individual books but I found the whole collection on sale right before Christmas. It’s amazing how well it holds up, there’s very little in it that’s dated.

And now I should go find them some Far Side books too. 🙂

Posted in Uncategorized and tagged calvin and hobbes, newspaper comics, sunday comics, the far side.