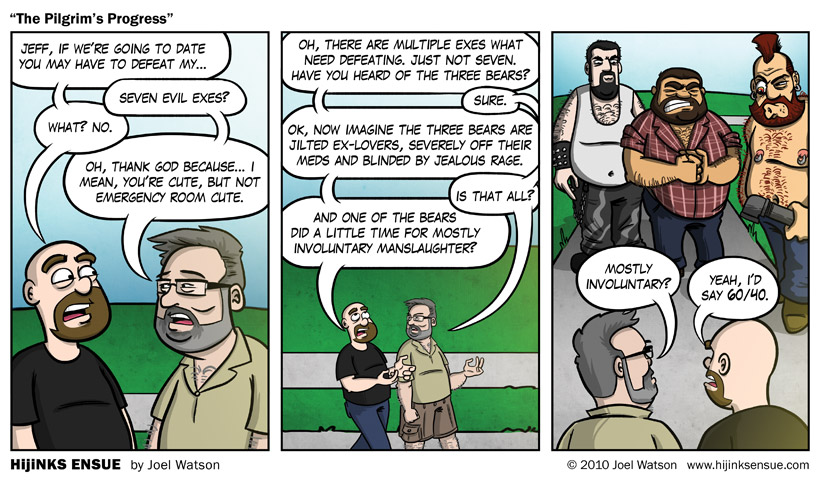 This comic has essentially nothing to do with Scott Pilgrim vs. The World but I’ve been wanting to draw Josh’s “Rogue’s Gallery of Exes” for a while now. So there you go. If you are wondering where “Goldie Locks” is, I know Josh dated at least one girl in highschool before his gay-wakening so let’s just assume she’s already been defeated… by life and the choices she’s made.

The title of the comic should not be confused with “Pilgrim’s Pride” which is a maker of fine poultry products. Actually that’s more suiting since neither titles have anything to do with the comic and one of them is about chicken. Let’s go with that one.

NEWS!
There is a new Fancy Bastard Facebook Fan Page (FBFBFP?)!!! The HE forum is basically dead and the old HE Facebook group is roughly the same. Twitter and the site comments seemed to have really taken the place of the previous FB online meeting places, but I think with this fan page I can give you guys a place to talk about non-HE related things and not force you do have an additional social network identity to keep up with. We’ll see how it goes. Feel free to check it out, start discussion, make posts, add photos, etc etc. For those interested I will keep the forum up and running for now (archive anything you want to save forever), but the old Facebook group will be deleted soon.