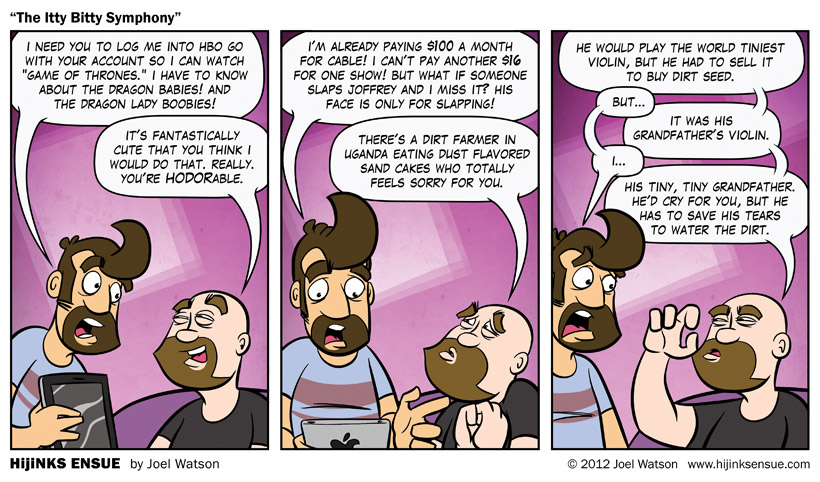 As last Sunday approached I really did start to get desperate. Without adding HBO to my already bloated television package, how was I going to watch Game of Thrones? I was lucky enough to shotgun all of season one  during a weekend long HBO free preview last June, but no such serendipity presented itself this time around. I assumed that, this being a non-insane world, I would be able to purchase HBO Go on my iPad and hook it up to my TV for the weekly viewings of beheadings and blood fountains and wolf maulings and such. Turns out this is in fact a TOTALLY INSANE WORLD, where HBO only offers it’s mobile service to those that ALREADY pay for HBO through their cable or satellite provider. You would think they would want, let’s say, $6-10 a month from all of the people who want to watch their content but don’t want 275 other channels of bullshit. It is one of those “shut up and take my money!” situations where the other party REFUSES to A) shut up and B) take the aforementioned monies.

I know this frustration is the result of existing deals the premium channels have with the cable companies that stipulate they not offer their content a la carte. The reason for these deals is to keep you paying $100 a month to get the 10 channels you watch instead of paying $2 or $3 a month per channel for those same 10 channels. Cable companies essentially operate under a model of prolonged denial of their own obsolescence enforced via content providers acting against their own best interests out of fear of change. It’s really a great system where everyone wins, only the prize is sadness. The concept of a cable company is broken. They know it and they also know that they are no longer necessary. Channels will be apps in less than 5 years. If you embrace that idea now, you might not end up like the record industry, you stupid dummies.

Luckily, my television provider just so happened to be offering 3 months of free HBO right when Game Of Thrones was about to premiere. I assumed the two events must be connected, but I couldn’t figure out how it benefitted AT&T (the provider in question). The only thing I could think of was that they are hoping to stifle anyone that might leave for another company offering new subscribers a billion free channels (including HBO) for the first 6 months, or that HBO requested the deal to get new users hooked on that sweet, sticky GoT. The first season’s free, as it were.

Speaking of Game Of Thrones, I did finally see the premiere last night and DAMN if it didn’t remind me what I was so excited about 9 months ago. Every single second Peter Dinklage is on screen I am essentially giggling with excitement. He absolutely owns every line and steals every scene. Even those he isn’t in, because I am still thinking about him. He’s like Poochie. Every time he’s off screen the other characters should be saying “Where’s Tyrion?” He puts the “IMP” in PIMP. My only criticism (and this is more George R. R. We There Yet‘s fault) is that with SO MANY new characters, new plot threads and new claims to the throne, it is difficult to see any one plot line or character arch progress during a single hour long episode. Alright, I have to get going. This three-eyed crow isn’t going to have nightmares about itself!

COMMENTERS: What did you think of the GoT premiere? If you are posting SPOILERS, please tag you comments appropriately. What’s the most complicated or expensive thing you’ve ever done to get to watch any one show? When I was a teenager, my home town stopped carrying Star Trek: Deep Space Nine. I had a girlfriend that lived out in the sticks and she was able to pick up Houston’s paramount affiliate on her 30 foot tall arial antenna. I would drive a tape to her house, she would record a month or so worth of episodes and I would watch them all in a sitting. DS9 was one of the primary reasons I was not able to break up with her LONG after I realized we had nothing in common.