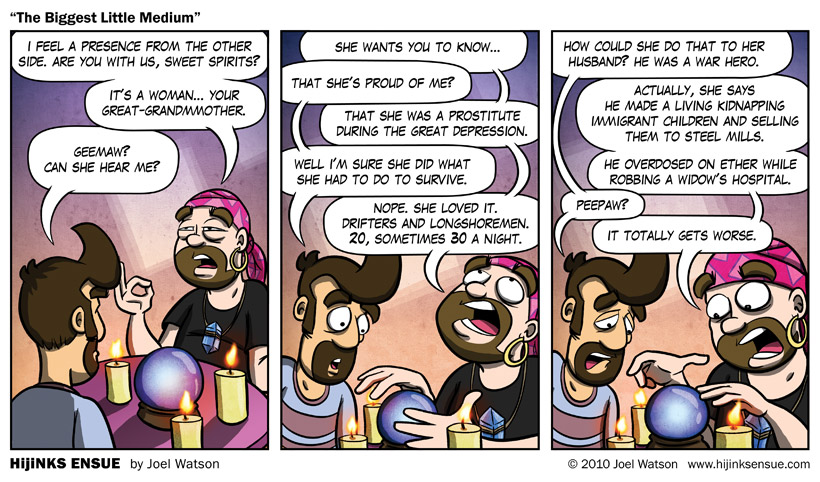 Much like Matt Damon‘s character in Clint Eastwood’s Hereafter, Josh is apparently able to commune with the dead. I don’t know if that’s just a thing the gays can do that they aren’t telling everyone else about, or if he was cursed with “the sight” while downloading bit torrents of the complete series of Mamma’s Family during a lighting storm. Either way he is a witch and will be burned for revealing hurtful truths about my dear, sweet Geemaw.

If you enjoy HijiNKS ENSUE please consider supporting its continued existence by making a donation or starting a donation subscription. This month has been super rough and I’m a little freaked out by the financial uncertainty that I am currently faced with. As a thank you, you will get access to The HE Vault, where you can download desktops, mobile/iPhone wallpapers, see behind the scenes art, view rough draft comics and listen to bonus podcasts. 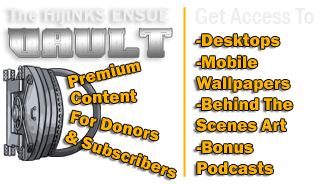 COMMENTERS: I know this comic doesn’t really have anything to do with Hereafter so, unless you want to talk about the film, let’s just make up other ways that Josh could have gotten psychic powers. Maybe he was trying to cram a Game Genie into a Virtual Boy just as he accidentally put Pop Tarts in the microwave with the foil still on. What are the extents/special circumstance of his powers? Do they only work during reruns of Ugly Betty or Project Runway marathons?