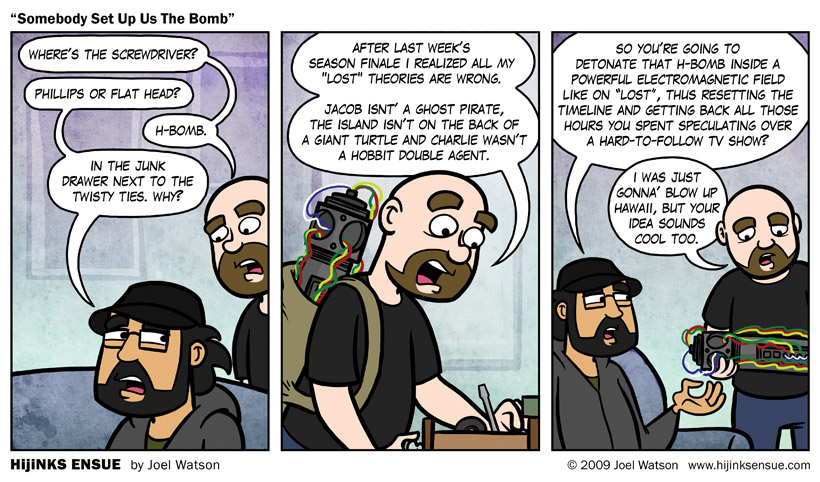 Maybe the giant turtle is UNDER the island, and the H-bomb will awaken him from his 1000 year slumber to rain slow turtley terror upon the island’s inhabitants!

This comic was intended to run right after the “LOST” Season 5 finale, but… it didn’t. Just pretend it got stuck in a complicated time loop and spent the last 3 years in 1977.

***SPOILERS AHEAD FOR THE LOST SEASON 5 FINALE***

Jack Shephard is off his fucking nut. He’s a few fish biscuits short of a box of DHARMA fish biscuits, if you know what I mean. Even if his plan to BLOW UP TIME works, he will essentially be making everyone’s life [but his own] worse. Charlie would still be a junkie and probably still be dead, Kate would be in prison, Sawyer would have no closure with his dad, Desmond would still be on the island away from Penny, Locke would still be in a wheel chair (i suppose you can argue that his new found sense of purpose and the ability to walk may not have been worth his life in the end), Juliette would still be a captive of Ben, Sun would have left Jin and Jin wouldn’t have stopped being an asshole, and Hurley… well, he always seems fine, so I suppose his life would be the same.

My new theory is that Jacob’s enemy, Fake-Locke, has actually been every dead island person who has appeared to anyone else. That includes Shannon, Boone, Christian, Claire, Hurley’s head-deads, etc. My guess is that he was unable to kill Jacob directly, so he had to trick Ben into doing it.

A couple of quick things: