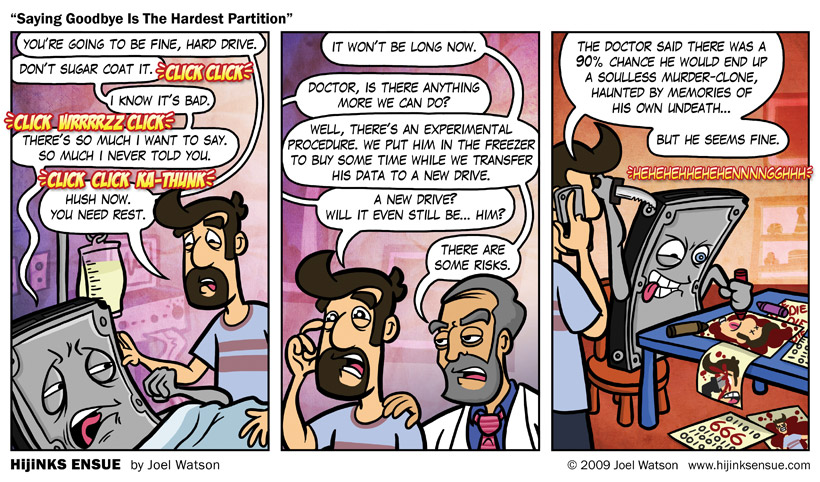 As many of you already know, the hard drive in my Macbook Pro died last week. It was working just fine then all of a sudden my machine locked up. I had just plugged in an external webcam so I assumed this caused some sort of conflict and rebooted the machine.

That’s never a good sign. Luckily I use SuperDuper! to make frequent bootable backups of my entire hard drive. I plugged that sucker in and GODDAMNITMYMOSTRECENTBACKUPISTWOWEEKSOLDWTFBSG!!!! I normally try to back up at least after every comic is finished. That way I can never lose more than a couple of days of data and typically nothing too important. For some reason I had neglected my backup duties for 2 weeks and in return the universe punished me by taking six comics forever into the darkness. What I actually lost were the original PSD’s, and print sized jpg’s. The web sized jpgs are safe on the server.

Desperate and panicing (I couldn’t find my towel either), I removed the drive and hooked it up to another machine in the house.

I realized that the frequent wrrrrzzz’s, pauses and clicks must be caused by armed Vietcong soldiers inside the drive forcing Robert Deniro and Christopher Walken to play a sadistic game of Russian Roulette. That makes sense right?

I took my sad tale to the Twitters and almost immediately you guys started telling me to put the drive in the freezer. I appreciate a good practical joke as much as anyone, but this was clearly not the time and I was not amused. Reassured that this method was indeed sound, I did a little research on my own. Holy shit. It was the real deal. Nerds all over were reporting that dead drives could be temporarily reanimated after a few hours of freezing. What did I have to lose? So in the chill chest it went. 2 hours later it emerged frosty and lifeless. I hooked it up to another machine and… waiting… waiting… it showed up. Well, fuck me sideways. I was able to navigate the folders (very slowly), so I tried to repair/rebuild the partition tables. Hardware failure seemed likely but I needed to rule out the less dire possibilities first. About 20 minutes in the clicks-o-sadness returned and all was for naught. A few re-freezes later I realized that drive was failing every time it reached room temp or above. I tried putting cold things on top of the drive while reading from it (frozen sausages, ice packs, etc… not sure why I tried the frozen sausage first), but nothing worked. Then the Tweeps suggested (and the rest of the internet confirmed) that I needed to try to read from the drive while it was actually IN THE FREEZER.

Again, what did I have to lose? A few ziplock bags and some extension cables later and I was off and running. Reading was unbearably slow, but I was able to retrieve some data. 20-30 minutes would yield anywhere from 10-40 mb. The six comics I was most concerned about were over 100mb each. After multiple attempts I eventually retrieved them all… or what was left of them. All of the PSD’s were corrupt and turned out looking something like this: 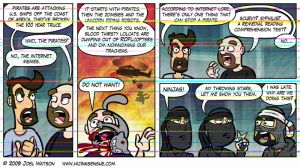 With the worst of them, well.. worse: 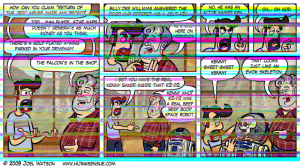 Not having the orignal full-res files for these comics means I will never be able to make prints of them or put them in a book. That’s no good for me, so at some point I am going to attempt to either rescue them through digital trickery or recreate them from scratch. That prospect doesn’t excite me, but hey, it could have been SO MUCH worse. At least I had a two week old backup. Now before you start lecturing me about the importance of backups, all of my important files are on a mirrored RAID file server in my office… just… not… my comics. I have no idea why I didn’t deem those important enough to backup in 160 different places. IR teh dUmbz.

The silver lining of this whole nasty affair is that I was once again shown how incredible my readers are. Not only did I get a flood of suggestions from tech-savy Fancy Bastards on Twitter, but FB Bill (who I am going to call “Number 1” or possibly “The Lieutenant” from now on) took to the Forum to organize a fund raiser for new hardware. In just a few hours you guys raised enough for me to replace every old HD in my machines and get backup drives for all of them. I say this a lot, but I am constantly reminded of how lucky I am to have such supportive and generous readers. I can’t begin to thank you all enough. Please know that I am infinitely grateful and humbled by your selflessness and unyielding support of my silly comic.

So here I am, a few days older and much more paranoid about backups and hard drive failures. That counts as “wiser,” right? Going forward I will be making SuperDuper! backups after EVERY comic and possibly implementing Time Machine for daily partial backups. I would also like to employ some kind of offsite storage solution. Do they rent out that hollowed out mountain bunker from the end of “Terminator 3.” If you have a suggestion for one that you’ve used and had succes with, please let me know in the comments.

I leave you with this thought:

YOUR HARD DRIVE IS GOING TO DIE WITHOUT WARNING! THERE IS NOTHING YOU CAN DO TO STOP IT! YOU CAN ONLY BE PREPARED WHEN IT HAPPENS! BACK ALL YOUR SHIT UP OR YOU WILL LOSE IT!