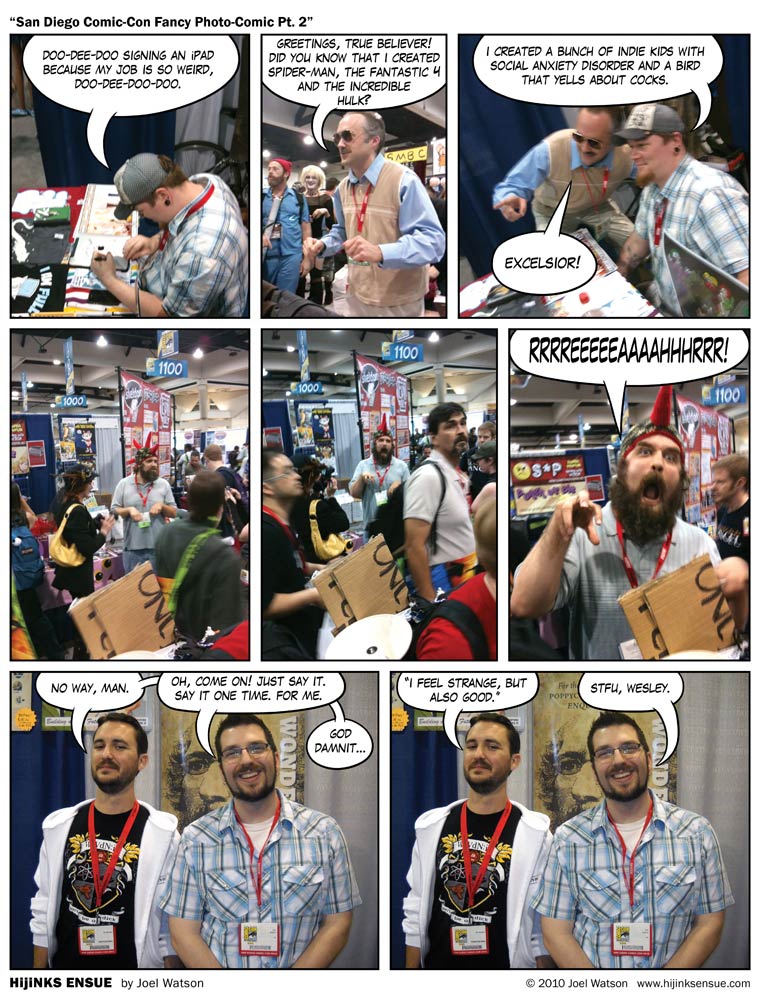 Part 1, and the first half of my post-SDCC write up is HERE.

[Thanks to Jeph Jacques, Kevin McShane (Fake Stan Lee), Randy “Bringin’ Homeless Back” Milholland and Wil “Evil Wil Wheaton” Wheaton for unwittingly appearing in this comic. If any of you don’t like it, please email and I will remove your image.]

I hope you are enjoying the Fancy Photo-Comics. This is the last one and they have given me a chance to decompress from SDCC and catch up on a few freelance secret projects that are due at the end of the month. There should be a real HE comic on Friday.

In the previous post I touched on the more life changing moments of SDCC (w00tstock, Tommy Wiseau, et al). While those events have left me wonderfully scarred they actually only made up a small percentage of my time at the annual NERDvana gathering. I’ve been exhibiting at conventions pretty heavily for the last year (I’m averaging about 1 a month) but SDCC was the first convention that I exhibited with a large group. The fine folks at Topatoco allowed me to stand beneath their towering wall o’t-shirts with such internet giants as Jeph Jacques and David Malki!, and actual giants like Ryan North (I’m sure he is average height by Canadian standards but in America we measure a man with feet, not cubits or syrup bottles or whatever). Mr. North has an embarrassing excess of feet… or footage. I forget the proper conversion metrics. HE’S TALL!

It was also a pleasure to finally get to spend some time with Sam Logan of Sam & Fuzzy, who was launching his first book “Fix Your Problem” at the show. He is also a Canadian but one of much more manageable stature. He had this wild theory that webcomics can be composed with characters who are NOT drawn from the waist up,  facing each other at a 3/4 view. Personally I don’t think it’s possible but who I am to deprive a madman of his dreams.

At most conventions I am engaging current readers, attempting to attract new ones and hopefully selling my own things to my own people. SDCC was a drastic departure from this routine. You could see the sense of urgency in everyone’s eyes. They had to get in and get out between panels. They had little time for idle conversation about robots and who they ought to be able to marry. It was more of a retail expo on the show floor than a comic convention. When I wasn’t talking to an existing HE reader I was essentially working retail. It was frantic to say the least. I passed the time inventing rappers and their subsequent rhymes with Mr. Malki!. His flow is considerable and not to be trifled with. I would have liked to chat more with Jeph but his line of adoring indie kids blotted out the Sun (or it would have, had the sun been directly on the floor of the convention center and constantly to his right in a sigle file line). I’m saying he was busy is all.

All in all the experience was great and I look forward to doing it again next year. I’m especially grateful to Topatoco for taking me along as that otherwise I wouldn’t have been able to even attend the convention. You literally have to wait for someone to retire or die before a table becomes available (I’m looking at you Randy. When are you going to DIE!?).