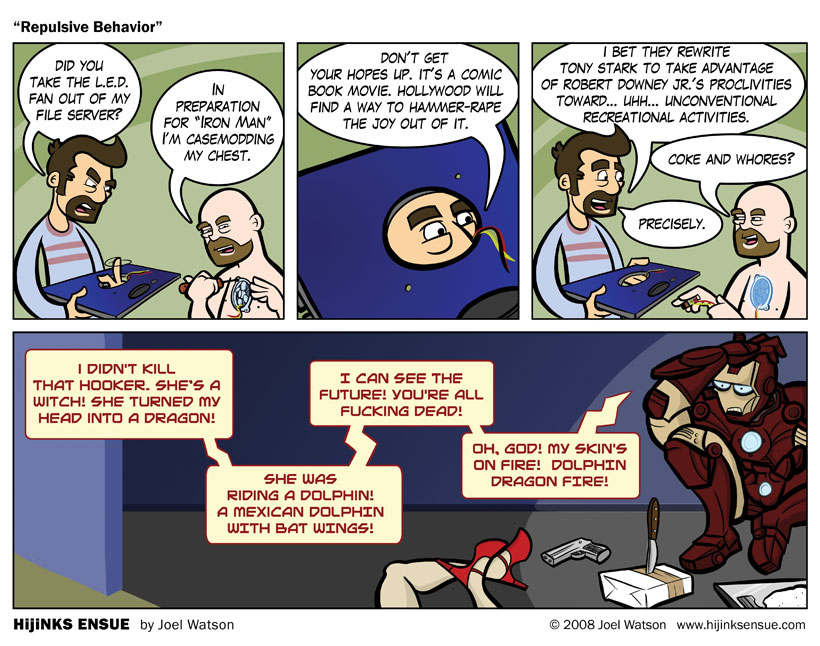 Punned! (not to be confused with Pwned)

It’s 2:30am. Cheap puns are all I have to offer. All the trailers for “Iron Man” make it look like the type of thing I would want to see. At first I thought Robert Downey Jr. (RDJ if you’re nasty) was a bit of bizarro  casting, but that’s when I remembered that Tony Stark was a loathsome, womanizing douche-hole. So RDJ is perfect! I’m full on expecting the suit to have a coke-vac nose candy sucking attachment. A face-Hoover of sorts.

I never really read Iron Man comics. Eli read the Marvel Civil War religiously. Apparently Iron Man is the Cheney of the group. I did buy the issues where Tony “died” and his black friend took over the suit-duties and became War Machine. As soon as they resurrected Stark I lost interest. How is a brother supposed to make it in this super hero game if the white man keeps coming back from the dead to take him down. Do you remember Black-Superman or Afro-Flash? Of course not. That’s my point. Stark… like stark white. Now it’s all starting to make sense. I hate the white man so much.