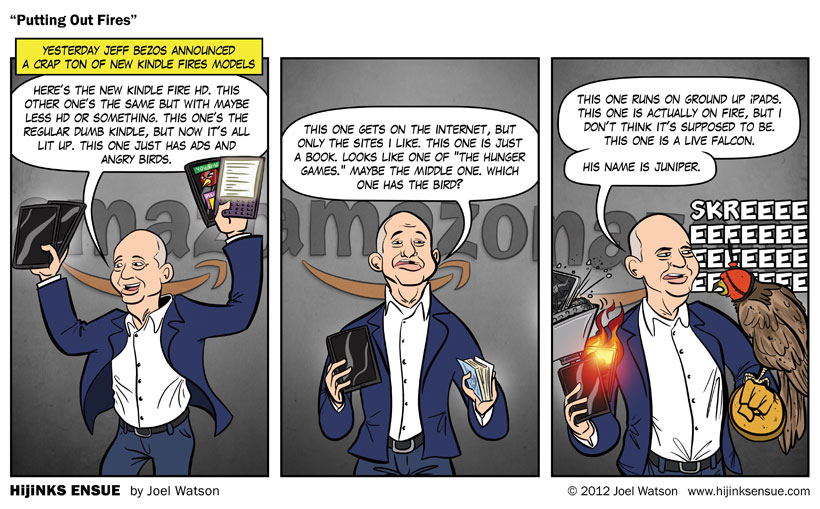 I can’t say I’m totally in favor of tech that’s involuntarily ad supported. Maybe if it was an option for a lower upfront cost I’d be cool with it, but knowing that it’s just part of the package is a little hard to swallow. Of course Google (the actual search engine, not the media conglomerate that beams keywords into your nightmares based on specific childhood fears you wrote about on Facebook) is a piece of tech that only comes plastered with ads. So maybe that’s not such a bad way to keep costs done. Ok, in the course of two sentences I have invalidated my own opinion, or at least confused it a bit.

I remember in the late 90’s/early 2000’s when you could get free dial up if you agreed to have about 2″ of your 15″ (14″ viewable) monitor taken up with ads. I never got it to work at my apartment, but I had a few friends that did and they would make a bezel out of black tape around their screens to permanently cover the ads. Perhaps that was the first ad blocker. Speaking of ad blockers, if you use one please consider white-listing this site. I make a about a quarter of my income from ads and every little bit helps.

Despite being an iPad man myself, I am glad that there are more and more quality tablets hitting the market and taking a foothold. When I was a kid I always liked the “futuristic” shows that would depict the magical world of the year 2001 where everyone had a personal communication device about the size of a text book with them. I even made a cardboard and paper model of Penny’s Computer-Book from Inspector Gadget. Now there are at least 4 items in my house that could be described as computer books. I’m not saying a tablet in every hand drastically improves the world or the average person’s quality of life (though an argument could be made if we got down to specifics), but it does make everything feel more futurey and that is fine by me.

I feel like having a smartphone with relatively fast internet essentially makes you a cyborg. No joke. It gives you nearly instant access to essentially all human knowledge and effectively increases your memory and brainpower to superhuman levels. Sure you can’t tell me how far away the North Pole is off the top of your head, but you can find the information in less than 30 seconds. Effectively, isn’t that the same thing? What if your phone didn’t have a screen, but instead had a neural output that fed the information you requested directly into your brain? Would there be any difference in knowing the names of everyone that signed the Declaration of Independence or being able to recall and recite the information immediately? I already look at my brain’s relationship to my computer/phone/tablet/cloud storage as a relationship between two different computers. Instead of taxing my brain to remember the several hundred things on about a dozen differently prioritized to do lists (do now, do later, long term, website stuff, freelance stuff, etc.), I only have to remember to check the list. I have replaced hundreds of processes, commands, and chunks of memory with a single command and a single bit of data. You could do the same thing with a piece of paper, but that wouldn’t be nearly as fun.

I guess I didn’t talk about those new Kindle Fires much, huh? Well, it seemed like there were a lot of them. At least four. Maybe two hundred.

COMMENTERS: Please weigh in on ad-supported tech or the new Kindle Fires in general. Or share any stories about how far you have gone to defeat some measure intended to cripple a service you were using in some way. Any black tape on the monitor? Ever record early streaming internet radio to tape the edit out the commercials? If you are a weirdo like me, desperately clawing his or her way into a perceived “future,” please share your thoughts on “my phone makes me a brain robot.”