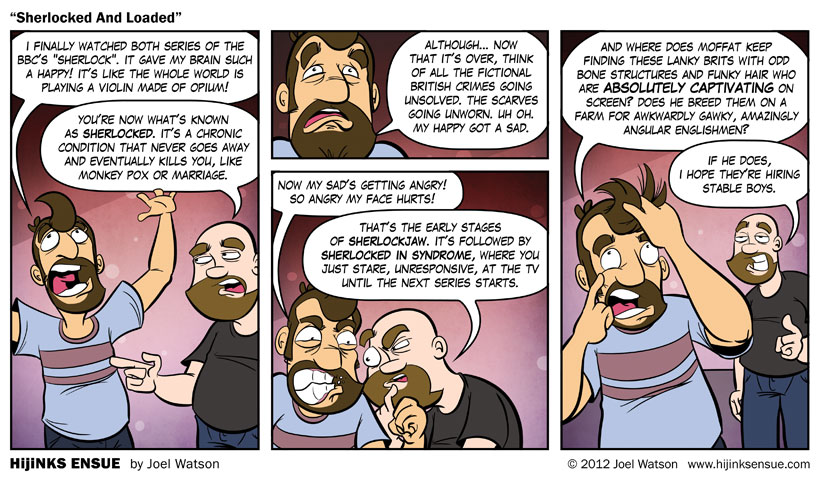 My wife and I shotgunned Sherlock series 1 and 2 in three days. It wouldn’t have taken THAT long if she hadn’t insisted on feeding, caring for and paying attention to our child. A child who can almost open a the Pop-Tarts box by herself which essentially makes her self sufficient. When we finished the series I felt that strange mix of relief and anticipation that comes with totally immersing yourself in a particular fiction for days at a time. You’re satisfied to have completed your goal, but anxious for there to be more of it. More to consume. When something is THAT good, waiting months for new installments is like… well, it’s almost like a REAL problem. Which it is not. Still… HURRY UP AND GET ME BACK TO 221B BAKER STREET! There’s mysteries what need solvin’!

I feel like Sherlock’s immensely impressive powers of deduction would be wasted on someone like me who rarely leaves the house other than to run simple errands or go to the airport, and who posts nearly every detail of his goings on to the Internet. He’d step foot in my dwelling (presumably where I had either just been murdered or been accused of such), rapidly flash across the items lying about – my suitcase (still packed from my last convention), my office (the room where I keep my piles of things), the couch with a big my-ass-shaped divot in it and me with my makes-British-look-Jamaican skin tone) – mumble, “Booorrrring,” under his breath and let D.I. Lestrade take it from there. Then he’d go convince Watson to let him shoot a cadaver off his head with a canon and torment his brother Mycroft until an interesting case presented itself.

I had a friend in my early 20’s that reminds me of Sherlock. He was smarter than EVERYONE in the room and was exceedingly frustrated with how much less intelligent everyone was than him. Of course this just made him seem arrogant and callous, when in fact he was just struggling to figure out how to relate to regular dumb people. He was the kind of guy that would give away all of his possessions then not have money for rent, or sell his car to pay for school, then skip all of his classes to read books about obscure, unused programming languages and small mammals. He was also one of my favorite people in the world. He even looked quite a bit like Cumberbatch. The only point to share all of that with you is to convey that one of the reasons I fell in love with the show Sherlock mere minutes after starting it (regardless of it’s incredible cast, superb writing, and sublime character development) was that I felt like I knew this guy and instantly understood what made him tick. I wondered if Moffatt had a friend like mine who inspired Sherlock or if he was just a culmination of his understanding of the human condition.

COMMENTERS: Feel free to share your thoughts on Sherlock. Did you ever know anyone like Sherlock who simply can’t relate to regular, stupid humans? Are you going to watch the US Sherlock show, Elementary, with Lucy Liu and the guy from Hackers? Well, don’t. It’s going to be terrible. What series did you watch via dvd, streaming or other bulk means that you simply couldn’t stop watching? “Just one more episode…”