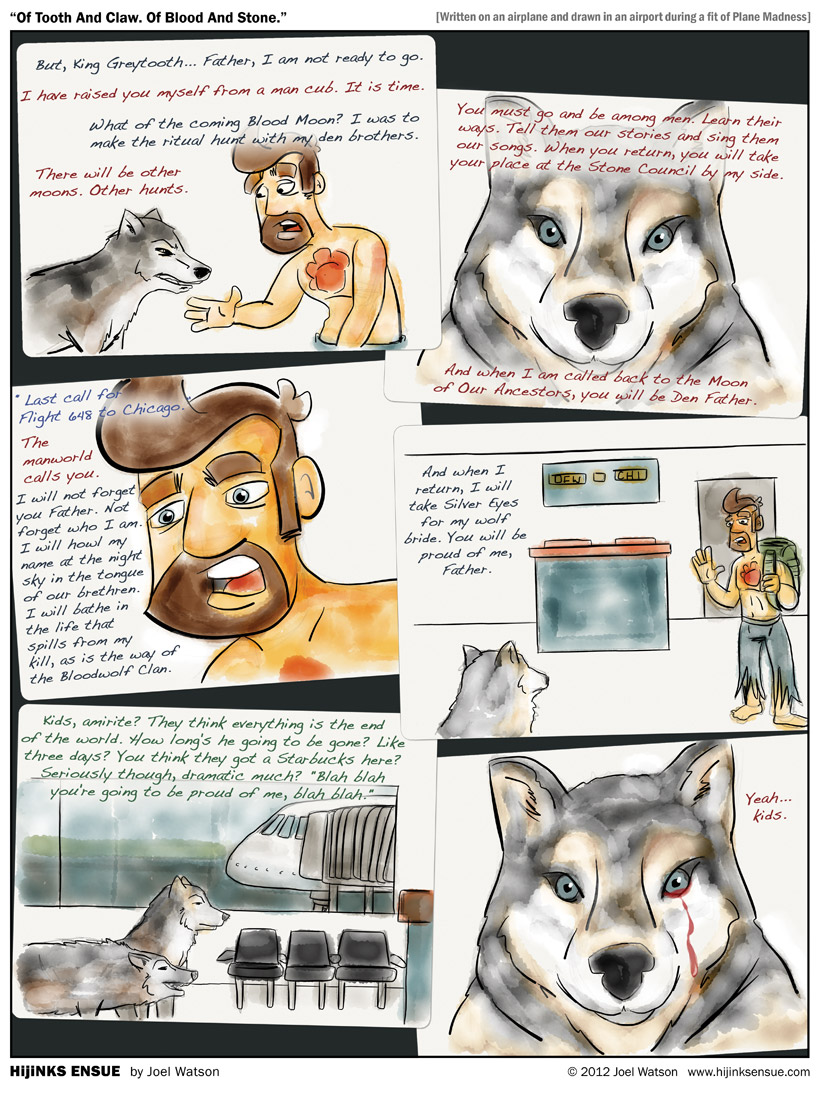 Strange things happen to me when I travel. I basically suspend the need for regular sleep and go into a sort of survival mode fueled by adrenaline, alcohol and copious amounts of meat. I become a creature not of reason, but of instinct. I become… a BLOODWOLF! Also sometimes I am chased by them through airports. I am alternately one OF them or tormented BY them. It depends on how long my flight is delayed or when the last time I had any coffee was. Anyway, the underlying condition that brings on the Bloodwolves is called Plane Madness, and I promise that you do not wish it on your worst enemy (my worst enemies are the rival pack to the north known as Cave Wolf Clan).

The incredibly odd thing about my condition, and you may know this if you follow me on Twitter, is that in order to keep my tenuous grip on reality during the onset of Plane Madness I have to immerse myself in fictional scenarios that are somehow less terrible than the chaos that is actually happening all around me. Obviously a pack of blood-hungry wolves terrorizing the terminal is preferable to the realities of air travel, so The Bloodwolves were born.

I feel like I’ve over-explained this concept in a big, confusing mobius strip now, but I am still recovering from C2E2 in Chicago last weekend and my brain is not yet fully de-wolfed and re-brained yet. I had a lot of fun at the con. Thanks to all that came out and said hi, got a sketch or bought a thing. The guys from Explosm and I wrote a musical at a few different bars over the course of the weekend. Who knows if we’ll remember it all and actually write it down before the Bloodwolves devour our memories with their bone-magics in order to conceal their existence. Oh, you didn’t know they did that? Of course you didn’t. That’s how you know it worked.

COMMENTERS: Have you ever suffered from Plane Madness? What about Road Trip Tripping or Train Dementia? What about just general Travel Insanity? Only in sharing your experiences can you begin to understand the Bloodwolves’ plan for you.

I wrote this comic on my iPhone at 30,000 feet, and subsequently drew it on my iPad using Paper by 53 and an Adonit Jot Pro stylus. I pieced it together and added text in Photoshop when I got home. Other than that, I have no explanation for what the hell it’s all about. The Bloodwolves were guiding my hand.