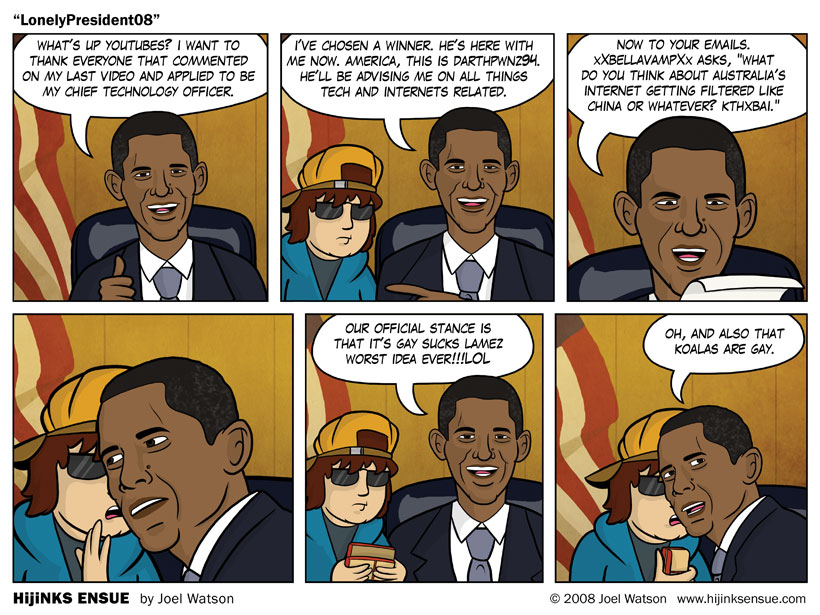 During the campaign there was a lot of talk about how this was the first election where the candidates had the option of taking full advantage of the internet, both to reach potential voters with their message and trade snarky comments on each others blogs. It’s safe to say the guy that won (that one) ran a more net-savvy campaign and I’d like to think it contributed to his victory.

The idea that our next president is a Crackberry addicted, Mac using Spider-Man collector makes me feel like we have “one of our own” in the highest office. I’m not preaching… just enthusiastic. He’s also going to be the first President of the United States to appoint a Chief Technology Officer. Here’s hoping he stays away from Youtube commenters and 4Chan members. If you have an idea as to who it should be or what they should focus on, you can cast your vote (sort of) here.

I remember, as the economy began to implode, hearing the media recall Roosevelt’s Fireside Chats and suggesting that someone (W?) should be communicating with the American people and reassuring them that their concerns were being addressed. I thought, “Obama should do a video blog! That would allow him to keep us informed and show that he relates to us on a technological level! Also it woud allow me to stare into his deep brown eyes while his dullcet tones gently bid me off to sleep!”

I guess he had the same idea. I really hope he keeps it up.

ALSO A THING!: Check out this forum post where a few Aussie Fancy Bastards weigh in on the potential castration of their nets.