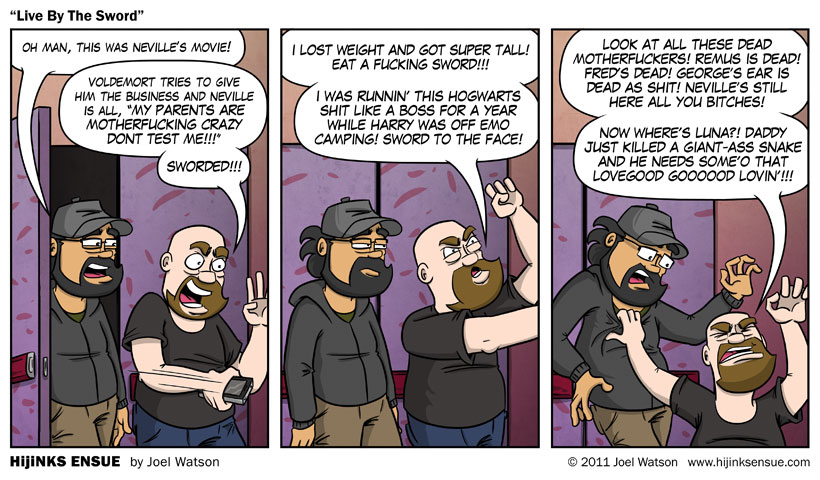 The newly relaunched HE Store is up and running over at Blind Ferret. Please go check it out and maybe buy a book or a shirt or something. Shirts will be shipping after we all get back from Comic-Con.

I saw Deathly Hallows Part 2 over the weekend with my wife. This is the first Harry Potter movie (maybe the 2nd) we’ve seen together since she finished reading the entire series. We’ve always been super compatible. We never argue, we want the same things, we like the same shows, but now… now that she’s ready Harry Potter… I feel like we finally speak the same language. We finally understand each other. [Some joking may have been involved in that last statement. Some.]

Despite the 4 year old kicking the back of my seat for nearly the entire film (SERIOUSLY?! Who brings a 4 year old to a movie with such nightmare inducing imagery and extreme violence? Way to go awesome parents!), I was completely satisfied with the ending to franchise. As the comic above shows (in stark contrast to my sentiments from this comic), Neville finally came into his own as a character. There has always been this shadow over his head of “I could have totally been the chosen one, if Voldemort had carried the 1 instead of dividing by 2.” He lived through an equally life shattering childhood tragedy and the only real difference between him and Harry was that everyone was constantly telling Harry how great he was and/or trying to kill him. Neville might have made a better chosen one than Mr. Potter had he been given the chance, but that sort of illustrates the point of the entire story, isn’t it? Harry wasn’t all that special until Voldemort made him special. Who we are and who people think we are/expect us to be are rarely the same person. Harry’s entire life was a series of terrible things happening and him somehow trying to find the will to move forward. The only way to know if Neville would have made the choices or “done it in 4 books” instead of 7, would be to go back 18 years and have Voldemort visit his house instead of Harry’s. Weird rant: over.

The thing I love so much about Harry Potter is that it makes me think about things like the previous paragraph. It makes me dwell on character motivations, strengths, flaws, etc. I think the hallmark of a great story is how many questions you ask after finishing it, not out of frustration, but out of a desire to know more about the world you were just visiting. For instance, just 2 days ago I had a conversation on twitter about why Draco is such a miserable piece of shit. Now that the movies are done I feel the same sort of diminished anticipation I did after finishing the books. A sort of “now what?” type of emptiness.

A few things about the movie itself: Every single time Raplh Fiennes opens his mouth, his presence dominates the scene. Ever line he delivers has such gravitas. The way he delivers the killing curse is so guttural and powerful. Kind of like, “AVARDAGHHH KADAAAGHGHGHGHGH!!!!” CG enyoungened Snape is not NEARLY as creepy has CG enyoungened Jeff Bridges. CG/Prosthetically beoldended Harry looked pretty decent. Ginny still looked 12. I know wizards just pretend technology doesn’t exists, but if just one of them picked up a gun I have a feeling the duels wouldn’t last nearly as long. Speaking of duels: the “clashing wands” green and red effect from these movies is one of my favorite special effects of all time. It carries so much more impact that “my light beam and your light beam are stuck together.” It’s like molten rock spilling out of the air. Just perfect. Are there wizarding public schools? These fancy Hogwarts kids only see their family’s for 2 months out of the year for 7 years. That seems insane.

I cried at least 4 times during Deathly Hallow Part 2. I’m so glad they broke this one up rather than leave a ton of essential plot elements out. It was a really fantastic end to the series.

San Diego Comic-Con is this week! I will be with Ryan and Lar and Danielle at the Blind Ferret Booth [Booth 1332] in the Webcomic area. I will have books 1 and 2, prints, sketch cards, stickers and nearly all of my shirts. 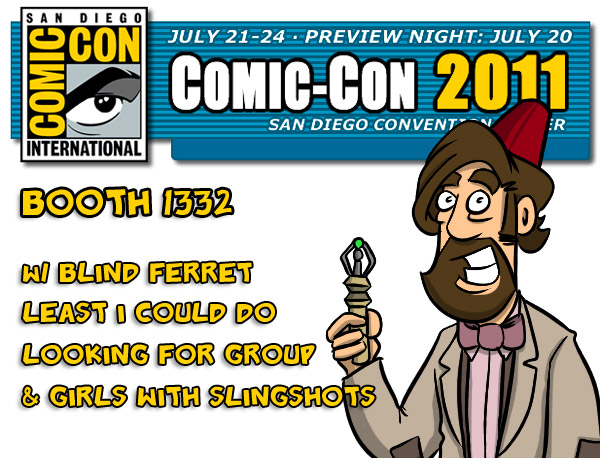 If you are going to be at the show, please come by booth 1332 and say hi. I will be the one going on 2 hours of sleep and propping my self up against Lar deSouza.