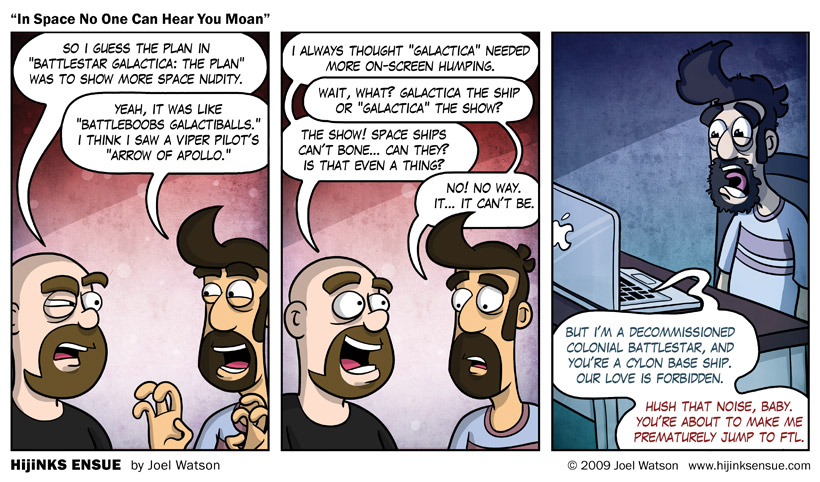 REMINDER!!! Dallas Webcomics Expo is this Saturday. I will be there with books and shirts and furtive glances and some sort of advice about webcomicing which will be delivered via panel format.

Alternate Title: “In Space No One Can Hear You Cream”

If spaceship on spaceship slash exists (please please please), then I really only want to see the NCC-1701 D going to space town on a Star Destroyer (or maybe the Death Star if you’re into that kinky shit).

So… Battlestar Galactica: The Plan. There’s one thing wrong with that title and it’s not the part that denotes what kind of ship most of the movie takes place on (hint: its the PLAN part… there isn’t one). I would suggest fans of the series PLAN to be super frakking disappointed. The Edward James Olmos helmed “Plan” plays out like spare footage from BSG seasons 1 and 2 (that should have been left on the cutting room floor) randomly stitched together and run through the Boring-O-Tron 5000 a few times.

Before you shout, “CYLON!” and start checking my spine for a certain mid-coitus glow, hear me out. The reason this direct-to-DVD feature feels like spare footage is because at least 1/3 of the film is comprised of… stock footage from seasons 1 and 2. In fact, Kara Thrace, Lee Adama, Helo Agathon, Col. Tight and a host of others ONLY appear in the stock footage. President Laura Roslin doesn’t even show her face in rehashed footage or otherwise.

The concept was sound. I would actually like to see what the Cylons were doing leading up to and after the attacks on the 12 Colonies. The execution is just sloppy, disjointed and ultimately uninteresting. It’s extremely Cavil-centric and he is one of my least favorite characters. His “mommy issues/Oedipal complex drove me to eradicate humanity” just doesn’t resonate with me at all. That sort of motivation would be a great explanation for a single murder or perhaps a series of failed romances and an inability to connect with others on a deep level. As for a reason to exterminate all life on 12 planets? Let’s just say Galactus had a more convincing argument with, “because I was hungry.”

If you’ve seen The Plan and have an opinion, share it in the comments. If you haven’t seen it and wish to remain unspoiled, read the comments at your own risk.

WEST TEXAS COMIC-CON in Lubbock, TX was a lot of fun and a big success from a “was it worth it/will I do it again” stand-point. Thanks to everyone that came out to see me and to those that discovered HE right there on the spot. Special thanks to cartoonist and organizer Will Terrell for being such a fantastic host and making me feel so welcomed. Check out his webcomic “Super Zeroes.” Will’s a very talented artist (his coloring and line work are superb), and he’s just started his own EXPERIMENT to try and make a living doing what he loves. He will also be at the aforementioned Dallas Webcomics Expo on Saturday 11/14 and I encourage you to give him some of your money (after giving most of it to me… assuming there is any left… there really shouldn’t be any left if you did it right).