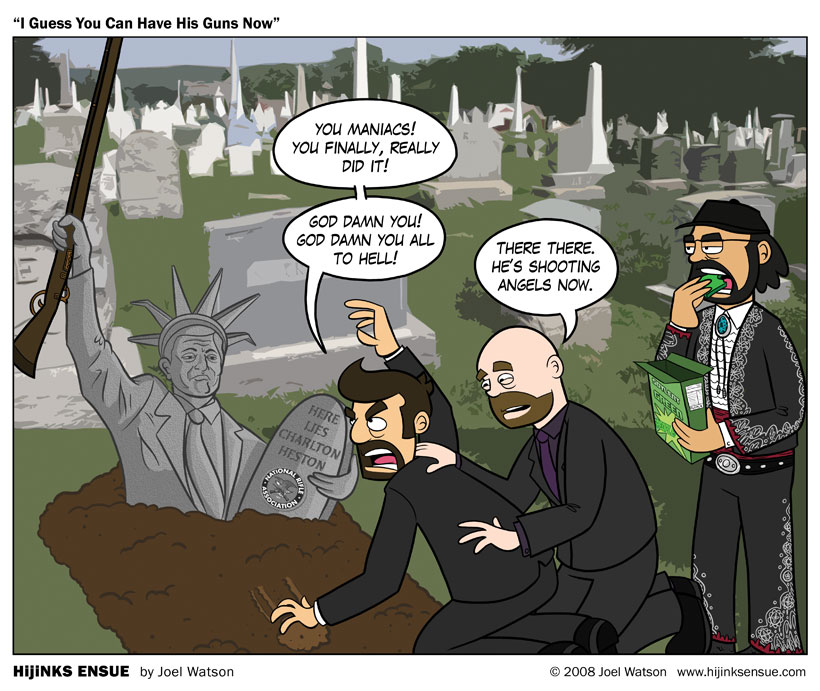 ‘Cuz, Ya know… cold dead hands and such.

An alternate idea for this comic had Joel, Eli and Josh eating “Soylent Green” made with “100% Ground Chuck.” I’ll speak of this no more.

Charlton Heston was certainly a Hollywood icon. He was well known and had a career spanning many decades. Despite that I never thought he was that great of an actor. He just had the one schtick and he pretty much pile drove it into the ground (beneath the planet of the apes). I like to call his acting style “loud and disgusted.” He was always appalled and screaming about what was so appalling to him.

I don’t mean to be (totally) disrespectful, but I always get kind of frustrated when someone dies and all of a sudden they are super-fantastic just because they are dead. They should run around and ask people what they think about you the day BEFORE you die, then use those quotes as your eulogy. If you asked average joe movie goer what he thought of Chuck Heston last week he might reply, “He’s alright. Kind of wacky about guns. That freaks me out a bit. Did you see him on “Bowling for Columbine?” Actually he’s kind of nuts. I dig “Planet of the Apes,” though. In a “its so shitty, it’s great” kind of way.”

Ask AJMG today and I’m sure it will go something like, “How do you condense the life of such a profound thespian into mere words? Is there a word that means “more splendid to behold than the face of God?” Take that word and multiply it times infinity and only then will you begin to approach the magnificence that was Charlton Heston.”

If there is a Heaven and if Chuck is there, I bet it sucks for him that Phil Hartman gets tonnes more tail doing his Heston impression than Heston could ever get actually being Heston.