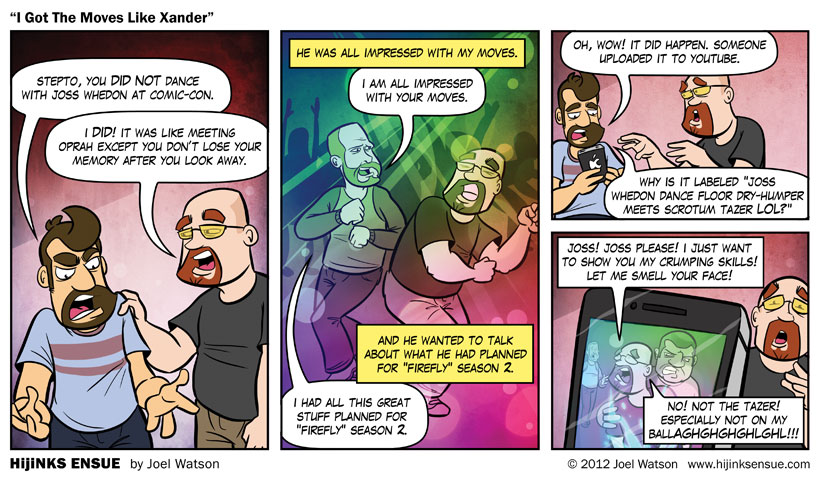 Here’s a mostly true San Diego Comic-Con 2012 Story starring my good friend Stepto (who you may remember from a previous appearance). It seems that while I was decompressing from the w00stock 4.0 festivities in Balboa theater as all the performers signed things and shook hands, Stepto was across the street at the Geek & Sundry party getting his groove thing fully engaged with Joss Whedon. The very same Stepto who was in my company mere moments before at w00tstock. The VERY same Stepto who has my cell phone number and know good and well how texting works. Yes, THAT Stepto. The VERY SAME STEPTO WHO IS NOW DEAD TO ME! HE DANCED WITH GOD DAMNED JOSS WHEDON! THEIR HIPS MET IN A BUMPY FASHION! DEAD! DEAAAAAD TO MEEEEEE!

But, I digress. In addition to breaking my heart and betraying my trust, Stepto did do something very nice for a fan that night. It has become a w00tstock tradition that Stepto will find the fan with the worst possible seats, high up in the balcony, take their camera and fill it with backstage photos throughout the night. You can see the results of this year’s shenanigans here.

I have a guest comic up at Cyanide and Happiness!

Grammar Dalek Shirts should be going on presale soon. As early as Monday of next week! Stay tuned for ordering info.

People have been asking me what I thought of SDCC this year. I told one friend, “Being on the show floor of SDCC is like working in the gift shop of the amusement park.” I think that sums it up pretty well. Unlike EVERY OTHER larger show I do, comics are no where near the focus of the show. They are really an after thought and that vibe is starting to permeate my (and other artists’) SDCC experience more and more each year. You really get the impression that the attendees are going to make time for you, if and when they finish up with everything else they have planned. Namely, standing in a line for 8 hours to see a 50 minute panel, then standing in line for 4 hours to get an SDCC exclusive toy, then leaving the hall entirely to go to one of the MANY offsite activities.

The fans I met through out the week were great, but they were also few and far between. In fact, the only day that felt like a normal convention was Sunday. There was a steady stream of fans, and sales and I distinctly got the impression that most people were saving the actual COMIC portion of Comic-con for the final day. Luckily, I got the sense of this trend early in the week and basically visited the booth a bit each day then headed out into San Diego for various parties, fun times and hang outs with my friends. All things being equal I would much rather be at the booth, meeting readers and selling merch. But due to the extremely odd vibe of the show, the slow booth traffic and the VERY limited booth space we had this year, I wasn’t really hurting anyone by not being there. Sunday was basically the only full day I spent at the booth. It’s really hard to justify taking a week off of work, the travel expenses and fighting the crowds of SDCC to do what was essentially a one day show.

I want to back up and say that I am NOT complaining about having the best job in the world, but San Diego Comic-Con has changed drastically in the last couple of years and everyone I talked to seemed to be feeling the same thing. Don’t be shocked if some of your favorite artists take a year or two off. I almost feel like the comics and the movie/TV/video game stuff should be officially separated into two events. Maybe then we could get some panels with accessible comics creators instead of ABC’s newest fairy tale-based show. It feels like the entire show has finally tipped to where it is basically unfriendly to an independent comics creator and that creator’s time could be better spent almost anywhere. I don’t expect it to get any better unless they built more hall space, which would probably have to be on floating barges out in the marina. Still, it is ONE HELL of a party, and it’s the only time that nearly all of my friends are in the same city at the same time for the same reason. It is a Comic-Conundrum.