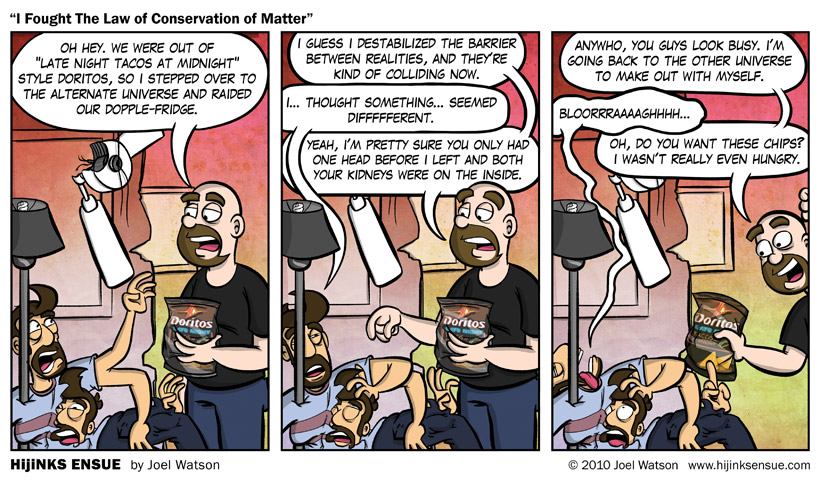 HEY! How about buying a HijiNKS ENSUE book? Check my Twitter Feed for 15% discount coupons to the HE Store.

If a book ain’t your style but you want to support the comic, maybe make a small donation why not?

Fringe (who’s midseason finale last night inspired this comic) is the best scifi television program being produced on TV right now (unless you count that show about the super religious people with cloning facility). From writing to casting to FX this show is nearly perfect… other than the fact that is has one of the most compelling main plot lines of the last decade which it almost NEVER explores in any fashion.

The overall arch of Fringe is that there are two parallel universes (ours and a slightly more technologically advanced but WAY more fucked up one), which are destined to go to war for their very survival. Agents from the alternate universe have been conducting crazy experiments on our side in preparation for the coming war and the FBI from our side is busy piecing these events together into something they call “The Pattern.” At the center of all of the mysteries seems to be Dr. Walter Bishop and his former partner William Bell. Bishop seems to have lost his memory and mind nearly 20 years ago, so he doesn’t quite remember his part in all of this universe hopping madness though the clues always seem to place him square in the middle of whatever the weirdness of the week is. His former partner, William Bell, was equally brilliant but instead going bat tits nuts he founded to the wealthiest and most powerful company in the world, Massive Dynamic. He also seems to be MIA from our particular universe. Intrigued? Me too. So why the fuck does this plot only make up less than 20% of the episodes over the last two seasons?

The main characters KNOW there is an alternate universe and they KNOW shit is about to get all kinds of explodey crazy, but they manage to put that aside almost all of the time in order to chase monsters-of-the-week and the regular joes that commit unusual murders. If I knew an alternate reality was about to crash into ours at a million miles an hour I would not be able to eat, sleep or shit until I had done everything possible to prevent it from happening. These guys treat the situation like a past-due water bill. They know it’s there, they know it’s important and likely to get worse before it gets better, yet they ignore it hoping it will go away. It’s hard to argue what’s “believable” in a show with genetic mutation, teleportation, and psychic mind control, but in the universe Fringe has established I find it hard to believe that “The Pattern” wouldn’t take up 100% of their attention.

Despite that gripe, I love the show. I just want them to stop teasing my scifigina with the tip of their plotcock. Its been two seasons, so cut out the foreplay already! Give it to me nice and har… ok, that got weird.

SIDE NOTE: John “Denethor” Noble as Walter Bishop is the most unique and enthralling character on TV since Hugh Laurie as House. I could watch that man read the phone book, or rake leaves or eat a whole chicken while a sad Hobbit sings him a song. ANYTHING would be fine. He just pulls you in and hypnotizes you with his crazy only man face and deep, rumbling old man voice.

OH YEAH! I totally forgot to mention that a certain fancy book appears in “Not Invented Here” this week. Thanks, Bill & Paul!