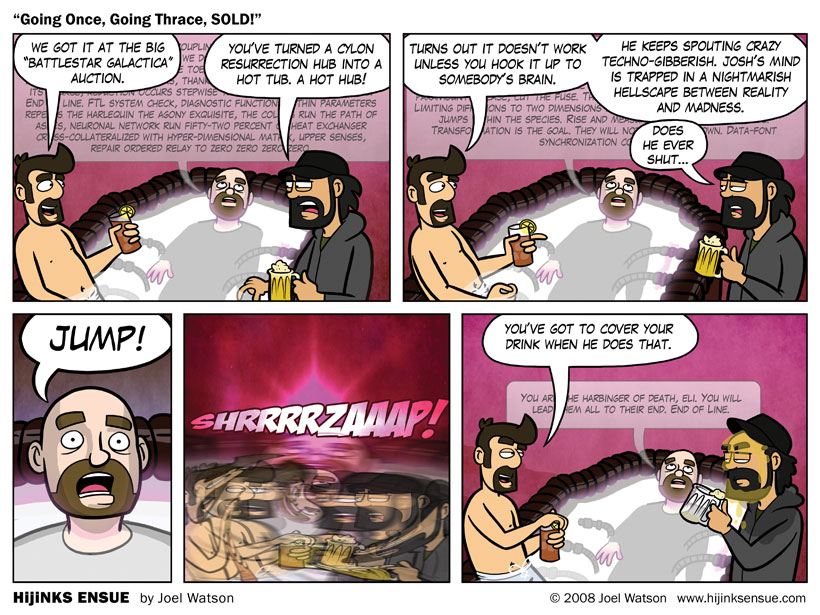 I’m sure a decent sized chunk of the people reading this don’t watch Battlestar (why? don’t you love happiness?), so here’s the cliff notes: Battlestar Galactica is a show, it’s 35,000 surviving humans vs. millions of robots called Cylons, some of the Cylons look human and one is still hiding among us, some of the Cylons (called Hybrids) are submerged in tubs of goo, speak only in math and riddles and occasionally go nuts and tell the future, and one of those “goo tubs,” along with a shit-ton of other BSG props and swag, are going on sale soon (link to actual auction site).

I will simultaneously pitty and envy the dude that drops $30-40,000 on a full sized Cylon Raider. In other BSG news, the prequel series Caprica finally got a full season greelight with a 2 hour pilot/movie. Despite being set in the BSG universe (50 years earlier) it’s not supposed to feel like BSG at all. I will certainly give it a try, but I can see myself losing interest pretty quick if it ends up being “FAMILY DRAMA IN SPACE!” Will they maintain continuity and have the kid playing young Bill Adama fall face first into a meat grinder so that he can one day be played by Edward James Olmos?

So back to the props: if you could take any prop from a film or TV show and repurpose it for every day use, what would it be? Death Star chandelier? Planet of the Apes Statue of Liberty Coat Rack? Back to the Future DeLorean…Delorean (ya’ know, to drive and be awesome in)?