[actually posted on 4/21/14] Still playing catch up and still a week behind on comics. I have a pretty cool idea for how to get caught up this week, that I think many of you are going to enjoy. More on that when it’s actually a thing.

RE: This comic
Get it? It’s because I envy David’s enormous audience and all his success! HAHAHAHAHA! Oh man, good times. Good times. Seriously, though, I DO envy David. Not for his readership, but for his work ethic. On a good day, David draws four comics. In a good WEEK, I draw three. I’m working on… working on it. I also want to recognize that David has been very kind about sharing these comics staring him with his readers, and I know they are not actually butt-eyed trolls. Jealousy can make you say hurtful things about eyes and butts. I’m certain they are wonderful people, who perhaps need another webcomic in their lives.

The Patreon Patron-ONLY Hangout was fun! It was just me and a handful of Patrons shooting various shits for an hour or so. For part of it they watched me draw a commission I was working on while we talked about conventions and such. There will be another one next month, and if you’re a $10 Patron or above, you are SUPER INVITED to join in!

The first ever HijiNKS HANGOUT was also fun! My guests were be David Willis and Angela Melick and you can view the archived stream HERE. If you miss the HE Podcast, the HijiNKS HANGOUT is probably a thing that will make you happy. Tweet your discussion topics, questions and drawing challenges for the next one to #HijiNKSHangout. 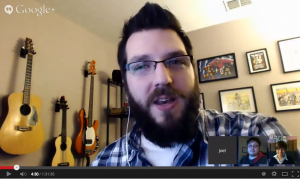