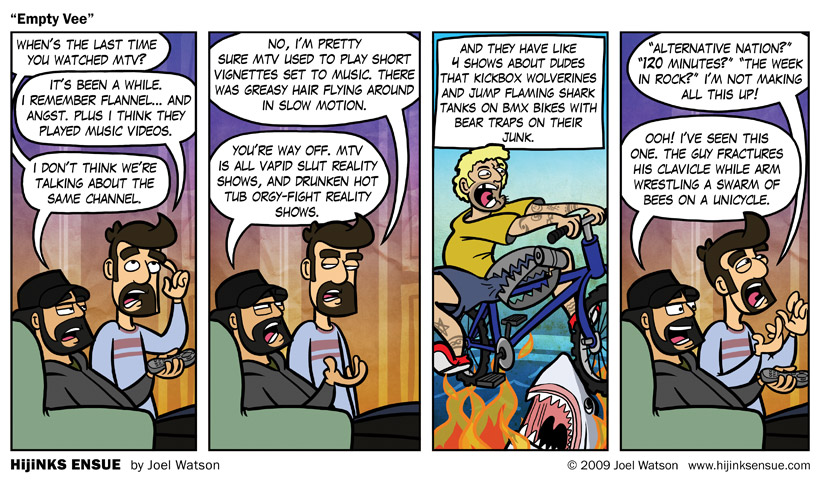 Today was very eventful and distracting (thus the crazy late comic), but there are some very good things on the horizon. I will make a proper announcement about one of them on Monday.

Not much to say about this comic. I saw that Mtv had a whole Sunday night line up based on dudes jumping into active volcanos with razor wire tied to their balls. I thought it was worth mentioning if for no other reason than to draw contrast to the Mtv that I grew up with. I used to watch Mtv to… hold on… wait for it… see music videos. Weird I know. I’m not saying they should go back to the way things were. I understand that music videos make more sense for YouTube than THETube nowadays. It’s just startling to see the transformation they’ve undergone in such a short time. I really used to rely on people like Kennedy, Kurt Loder and Matt Pinfield to show me what was going on in the world of music. The internet really made that entire chanel obsolete. I agree they had to evolve or die, but 45 scripted reality shows about sunken-eyed debutards does not entertainment make.

Some day I’ll tell you the story of how VH1 wasn’t always about disease ridden skanks vying for the jock of a washed up 80’s rock star/rapper. It’s true. I swear.