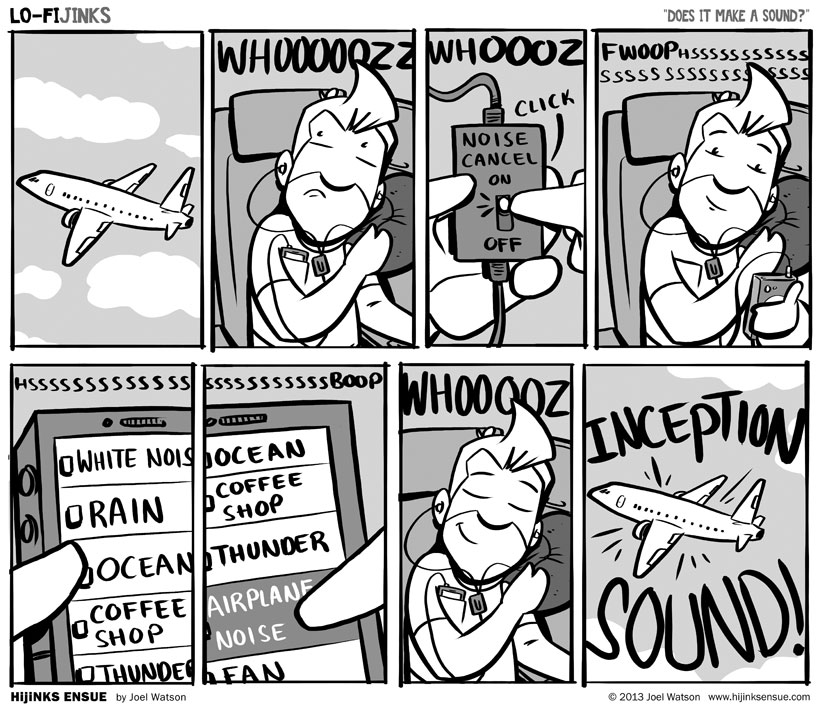 This is an actual dumb thing that I began doing on my plane ride home from SDCC. BEGAN doing, I said. I did not actually complete the ridiculous act. It’s just that as I was scrolling through my list of soothing sounds in an ill-fated attempt to sleep on the plane (a feat which I have never accomplished in more than a 30ish minute stretch), I remembered that the “Airplane Noise” setting was the most relaxing and sleep inducing. Why is it then, that the actual sound of an actual airplane is probably my very least favorite sound?! I’m looking at you, science! Shouldn’t you have an answer for this? Is it a plane-based conspiracy, like chemtrails? Oh, it is? Never mind then.

1) Noise canceling headphones. My wife got me a pair of these for Xmas or a birthday or somesuch about a year ago, and they rank among my most treasured possessions. I’ve got a rather inexpensive ($80-90) set of noise canceling earbuds (portability was essential for travel) and they have actually changed my life. I find the elimination of engine noise, random chatter and general airplane general cacophony decreases my discomfort during air travel by at least 50%. I have very sensitive ears and all that unfocussed noise was always the aural equivalent of leaky roof dripping directly into my eye. Also the roof is leaking poison. Spicy poison. Notice I say it “decreases my discomfort” rather than “increases my comfort” because the latter would imply that there is a degree of comfort to be had on an airplane other than in first class. There is not. Speaking of…

2) American Airlines Main Cabin Extra. On my plane to San Diego I sat down in my middle seat (WTF, I selected WINDOW!) and noticed that my knees were not touching the seatback in front of me or positioned directly inside my own ribcage. In fact there was a good 12″ of space between my naturally positioned knees and the nearest immovable obstruction. For anyone in or around the 6′ tall range, this is a HUGE DEAL. Every aspect of my 3.5 hour journey was improved by this extra space. I could get to my bag easier, get in and out of the row easier, I didn’t feel as intimately adjacent to my row mates as I normally would in a middle seat and when I leaned the seat back to attempt to sleep, IT ACTUALLY RECLINED! MORE THAN TWO DEGREES EVEN! WHAT WAS THIS SORCERY?! The plane touched down and I immediately tweeted my confused delight regarding the embarrassing amount of legroom to which I, a lowly coach passenger, a thing worse than landing gear failure in the eyes of the airlines, had been gifted with. AA quickly responded via tweet letting me know that I was enjoying “Main Cabin Extra.” I didn’t select this feature or pay any extra for it, and I don’t know if it effected the entire cabin or just a few rows, but let me tell you, tall people, this is a thing that you need in your traveling life. I need to do some research and find out if there’s a way to guarantee the Extra on all my flights from now on, because it was entirely less uncomfortable than the accommodations I am accustomed to.

COMMENTERS: What is your essential travel tip or piece of discomfort decreasing travel gear?

I always pack a change of clothes in my carry on. One person in my group had their luggage lost, and had to hand wash and re-wear the same clothes for several days before the situation was fixed.
Block IPDelete
Reply

Socks. Even with sandals. Because who wants to wear shoes on a long flight? But you don’t want your bare feet exposed to the random dirt that’s in an airplane cabin, either.
Block IPDelete
Reply

I always carry an inflatable back pillow, because all airplane seats, even business/first class ones, are designed for people about a foot taller than me, and so effectively have no lower back support for me. Since I started this practice, my lower back hurts way less at the end of a long flight than it used to.
Block IPDelete
Reply

There’s really just no way for me to ever be comfortable on an airplane, they simply weren’t designed for people in the 5’10” – “Holy shit you’re tall” range. The best I can hope for is an aisle seat so that I can let one of my legs extend fully every now and again during the flight.

I recently did fly to and from London with United and discovered that paying the extra cash for “Economy Plus” for five more inches of leg room between seats really did make all the difference. Granted I was still pretty uncomfortable for 8-10 hours in either direction, but at least I didn’t feel like my knees were providing back support for the person in front of me.

I used to do aisle seats for the same reason, then I realized that if you get the window seat and lean into the the curve of the plane, put one foot under the seat in front of you and the other foot under the seat in front of the person in the middle (without bothering them), you actually get more room for the whole flight instead of having to pull your feet back every time a cart rolls by.
Delete
Reply

The only issue is this is a tossup – if there were a window for every seat, it’d be fine, but sometimes you end up against the space between windows instead of the window itself – then it’s only different from the aisle because you’re not leaning against some total stranger. I used to make two flights per week.

You actually CAN guarantee Main Cabin Extra… for a $50 fee.

Sorry, meant ‘only different from the middle seat because you’re not leaning against a total stranger’
Block IPDelete
Reply

I just look around at how miserable everyone else is looking. I find comfort in that. 😉
Block IPDelete
Reply

I gave up on my window seat experiment because the curvature of the plane means I can’t put my outside leg straight in front of me. Also, usually the seat support is under the seat in front of me, not between the window and middle seats. This, combined with the curvature of the fuselage, means that there is significantly less room for a bag. Aisle seats also suffer from reduced room for a bag and carts rolling by hitting you in the shoulder/elbow; but the middle seat only works if you have someone to cuddle with (personally that means someone I know, maybe some people aren’t so restrictive) in the window or aisle seat.
Block IPDelete
Reply

As someone who is both tall and fat, air travel (or bus travel… damn you to bus hell you rolling sardine cans) is just generally miserable all around. That’s why I drive everywhere whenever it is even remotely an option.
Block IPDelete
Reply

I recently flew quite a bit on the States on holiday. United is kinda dreary and cramped, Air New Zealand’s long-haul flights give loads of room to Business, Economy Plus, and Economy Skycouch passengers, and squeeze everyone else up to make the huge expensive seats fit.

By far the best airline I flew on was Southwest – their practice of charging more for first access to seats, rather than for specific seats, means boarding is a bit more of a hassle, but on the other hand it does mean that the space that would be reserved for Business class knees is averaged out across the entire plane, giving everyone an extra inch or two of space. Quite nice!