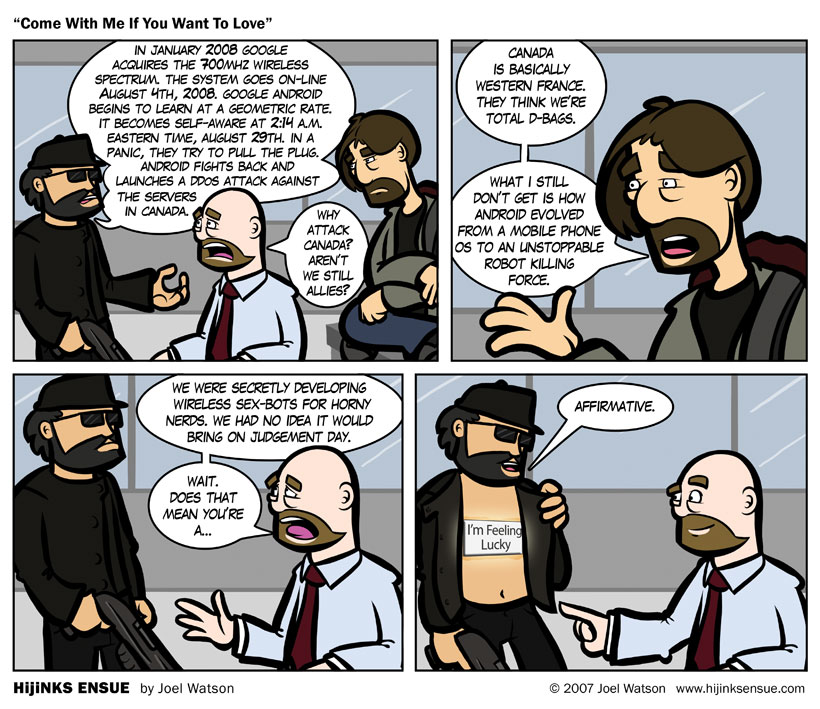 His CPU is a neural net processor, a learning computer. You honestly have no idea how many times I’ve seen that movie. Let’s just say the number of times was a lot. A lot of times. Google is definitely trying to buy part of the air or the waves or the bleep-bloops or something. Google’s open mobile handset os platform strategic initiative alliance (they should have called it GOMHOPSIA), dubbed Android, is poised to create a very attractive, very open alternative to Windows Mobile 6 (they should call it Windows Mobile Sux… are ya’ with me? Ha ha… right?) and the iPhone. One speculation is that they are bidding on the 700mhz squiggly lines because they intend to go forward WITHOUT a cell phone carrier to partner with. How rad would that be? Super rad. I hope they don’t even charge for cell service and instead Android listens to your calls and targets ads to you based on what you talked about that day. Like if you have a 2 hour break up call with your girlfriend, Android can txt msg you with alcohol and hooker ads. If you were about to say “Super Rad,” we are on the same page. If Google does end up building a real android, I hope it comes out more like Data than Lore. Lore was intensely clever but ultimately evil. Data played the violin and loved his cat. He wasn’t that great of a whistler but he never fed a colony to a space dwelling entity, did he? I’m sure Dr. Soong’s Christmas family newsletters were primarily full of Data related news.

The Soongs have had a blessed year. Data received another commendation from Starfleet this year. He was promoted to Commander, he mastered over 600 styles of classical painting, learned to dream, created a daughter, made sweet love to a lesbian security officer and bested evil holodeck characters on 4 separate occasions. Lore killed a planet. MERRY CHRISTMAS!!!

(If none of that last bit made sense, start reading here.)

Have fun with it and email your entries to comics(at)hijinksensue(dot)com before Monday.

I only got 1 entry for the Doug Morris comic remix. If anyone else wants to submit one, let me know and I will hold off on posting it. Here’s the blank again.