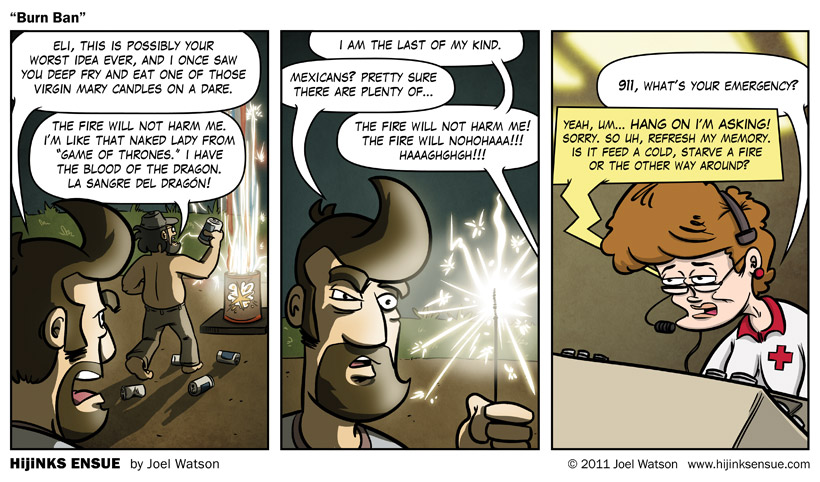 My daughter only likes fireworks in 2 ways: big and far away or tiny and close up. We tried some bottle rockets and such last year, but she found the whole ordeal pretty terrifying. So this year we kept our incendiary festivities low key. Just a few smoke bombs, spinning flowers, sparklers, poppers and those little ones that spin around then shoot up into the air. We waited for dusk, then went down to the end of the cul de sac with our neighbors who have a son about our daughter’s age. All was going swimmingly. Things were smoking and sparkling and changing colors. Chemicals were reacting like nobody’s business. The founding fathers would have been proud.

Then, right as we were about to pack up and head out to watch the town fireworks display, one of the spinny-shooty jobber’s fuse backfired (I am still trying to figure out exactly how this happened). Basically I lit the end of the fuse and instead of spraying sparks outward as the previous dozen had done, it shot sparks down at my hand. It was like the fuse burned incredibly fast, or somehow the actual firework began to ignite as soon as the flame hit the fuse. I was burned on the left thumb pretty severely. I grabbed a popsicle, the only icy thing we had on hand, and kept it against my newly seared digit.

I’m not going to lie, I bitched and moaned like a little moany bitch. It fucking hurt. I mean IT. FUCKING. HURT. I kept a cold compress on it, and my wife went to the pharmacy to look for a miracle salve or a box of replacement thumbs. Here’s where the comedy comes in. She finds these little gel pads that you stick on the burned area with medical tape (which worked like a charm incidentally), heads to the check out (this is just before midnight on July 4) and three out of three people in line were buying burn remedies. HAPPY BIRTHDAY, AMERICA! WE SET OURSELVES ON FIRE FOR YOU!

I feel like on the fourth and new years the pharmacy should put all the creams, salves, aloe and bandages right up by the front door like Wal-Mart does with the umbrellas when it’s raining or the cranberry sauce on Thanksgiving. These are high demand items and we don’t need to be searching all over the store for them! Especially considering the shopper or one of their loved ones is probably still a little bit on fire.

COME ON DOWN TO THE CVS PHARMACY FOURTH OF JULY MEGA BLOWOUT SALE! We’ve got aloe! We’ve got ointments! We got 50% off disinfectant sprays and buy one get one free bandages! We’ve got gauze so sterile, you’ll have to wrap it loosely around your seeping wounds to believe it!

COMMENTERS: Have you ever been involved in or witnessed a fireworks disaster? What about non-disastrous fireworks related shenanigans?

Posted in Uncategorized and tagged 4th of July, fireworks, game of thrones, holiday.