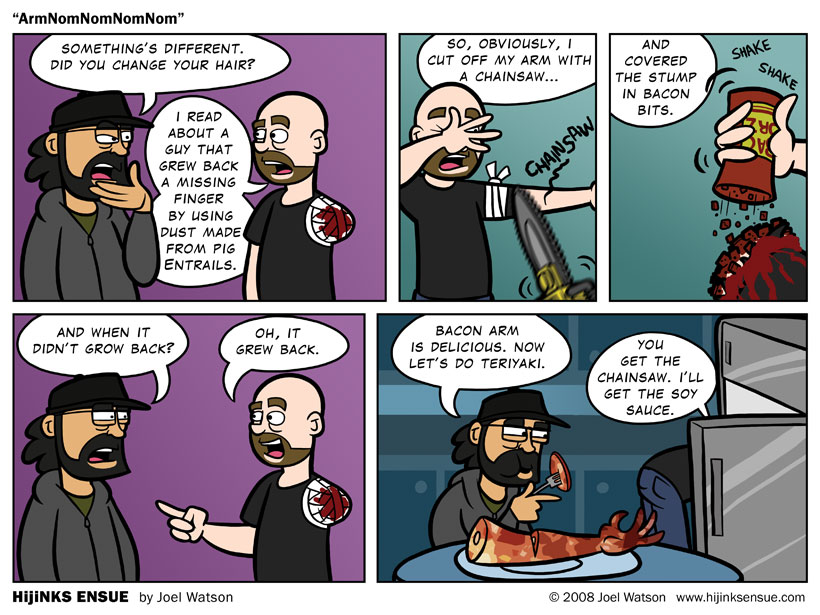 So, cannibalism?  Haven’t done that yet, have I?

If you are desperate for context, read about the man with the magical piGxie dust finger, then read about how it probably never happened (or at least not how you would think).

Josh’s relationship with bacon is a long and lustrous one. Whether he’s eating a Baconator from Wendy’s (I’d like to point out that the word “Baconator” is derived from the word “Terminator.” As in the robot sent from the future to kill John Connor and lead the Republicans of California. Think about what that implies regarding the sandwich in question), or mainlining bacon greese into his eyeball (which is really the only way he can get high now) he’s usually… well, ingesting bacon. Like always. If they offered a complete bacon transfusion, he would be in the trials. If it was legal to marry bacon (is there gay bacon? Gaycon?) he would lawfully wed, then devour is crackling, sizzling bride.

Much like Tony Stark needs an electromagnet near his heart to keep the shrapnel out, Josh requires a similar device to prevent the years of bacon build up from strangling his aorta. If it were also able to power a suit of robo-bacon armor, villains worldwide would fear the crushing might and delicious aroma of BACirON Man. Or Iron Bacon, or Cast Iron Skillet or whatever.

Hmmmm…. a bacon super hero? I might be on to something.