Do you live in or around Austin, TX? Come see me and Dave from Cyanide & Happiness and Randy from Something*Positive at Wizard World Austin this weekend (Saturday and Sunday only). We’ll be at the Dragon’s Lair booth #938 selling merch and doing sketches. Here’s some more info!

I absolutely refused to give Arrow a chance due to its unfortunate pedigree. Being a DC/Warner Bros super hero “reimagining” on The CW and starring nothing but underwear model gorgeous people set off all of my “DON’T WATCH! DON’T WATCH!” alarms. Then, in a moment of weakness, I watched the pilot on Netflix. 3 days later I had binged the entire first season. 3 days after that I was caught up on season 2 via Hulu and The CW app on my iPad (both horrific viewing experiences when compared to Netflix). I gotta say, I was wrong.

Arrow is super enjoyable. That is to say, it is CONSISTENT. If you like the pilot, you will like every subsequent episode just as much, and several you will like quite a bit more. Everything good and bad about Arrow is present from the word “Go” and it keeps a pretty even keel throughout. The stars are far better actors than you’d expect from the CW, the writing is above average for a super-soap, the writers are obviously not scrambling to fit a bunch of loose plot threads together (it feels like they actually have a plan, but leave room for new ideas), the FX are not cheesy, the cinematography is better than most cable action dramas and (something I was not expecting to notice or care about) the fight choreography is quite interesting. There’s a lot of close combat (it’s not all arrows from afar) and the producers have obviously spent some time developing a fighting style for the main characters that plays well on TV without being overblown or unrealistic.

All of that said, there are moments of soapy-cheese (usually between Oliver and Laurel), sometimes the villains or the guest stars are not on level with the core cast acting-wise (but rarely if ever Tom “Wait… does… Clark… smell… a fart… or… is… he… just… trying… to… convey… emooooootion?”  Welling horrible), and… no, that’s about it. There just isn’t much to dislike about Arrow at all.

One of the aspects of Arrow that I’m particularly enjoying (something that Smallville failed miserably at), is how they are integrating characters from the wider DC universe in clever and subtle ways. They plant seeds episodes in advance for big character appearances in ways that would go totally unnoticed by non-nerds, but also won’t infuriate their core nerd audience. When they do introduce a larger than life character, they find a way to distill them down to their basic elements without totally reinventing them (since the Arrow-verse seems to be one without Metahumans or actual superpowers so far). I don’t want to get into specifics to avoid spoilers, but we are doing a SUPER SPOILERY THREAD over in the Fancy Bastard Facebook Group (newbies HERE and season 2 discussion HERE).

So, if you liked the idea of Smallville but wished it were 1000% less dumb, or 100% more like Batman Begins, I strongly recommend checking out Arrow. Season 1 is streamable on Netflix and Season 2 (which is about half-ish over) is available via Hulu (free version) and the CW streaming iOS app (though episodes are being removed as they get older). It feels good to enjoy a damn super hero on TV again.

Buying holiday type gifts for a special Harry Potter Fan? If you haven’t seen my wife’s Quidditch necklaces, you probably should is alls I’m sayin’. 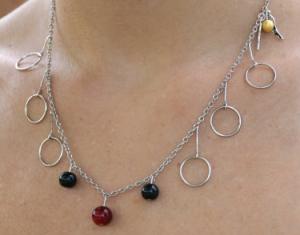 HEY! CHECK THIS OUT!

I did an interview with Graphic Knowledge Magazine (Issue 2) (available here for iOS devices) about the origins of HE, the recent shift to storyline/character based comics, and the ups and downs of this weird job I have. I felt like I was super honest and there’s probably some good info in there for anyone looking to do their own thing for a living.

Don’t do it, Josh! It’ll destroy you!
Block IPDelete
Reply

don’t you worry about a thing, this comic would never, ever, EVER actually happen in a million years. Smallville was dead to me about 3 episodes into season 4, and I will carry that grudge to my fucking grave. This comic is basically libel. Or slander. I forget which is which.
Block IPDelete
Reply

If it’s spoken, it’s slander. If it’s written, it’s libel. Spoken and slander both start with S, so that’s how I remember it.

Smallville also starts with S. Draw your own conclusions.

And if i use a megaphone?
Block IPDelete
Reply

I’m surprised you lasted up to season 4. To be fair, I don’t think the problem was bad writing, it’s just that Superman is a terrible character to have any kind of long-term story arcs for. He’s basically a god (time-travel anyone?), so trying to create any kind of conflict gets ridiculous after a while (“OHEMGEE, YOU have a chunk of a planet that blowed up on the other side of the galaxy?! ME TOO!”).
Block IPDelete
Reply

Which of the three sister witches was a total B-Word? I bet it was the one whose name started with a ‘P’!
Block IPDelete
Reply

The think that gets me about Arrow is it is full of attractive people with odd faces. Oliver and the girlfriend (sorry, terrible with names and I’ve only seen a handful of eps) both look like God said “I’ll build this hottie from the feet up” and just kinda halfassed it as he got near the end. And yes, God talks like a sorority girl when making people.
Block IPDelete
Reply

I stopped after the Huntress. I started to feel like we were treading into Cape territory after that – and I’m a LIFE-LONG comic geek.
I dunno. I might try it again. When my girlfriend’s not home and the shades are drawn.
Block IPDelete
Reply

“Everything good and bad about Arrow is present from the word “Go” and it keeps a pretty even keel throughout.” <– My enjoyment of Arrow is totally summed up by this statement.

The wife, who is the resident comic book nerd, does not watch Arrow but will occasionally walk by and go, “Oh cool they’re introducing so-and-so”, to which I have to respond, “Um… sure…” Which is to say, it’s quite enjoyable for the those with little comic book background who just want their stories.

Yeah that’s me. I read some review of Arrow elsewhere that caught my interest and so started watching it online before the start of the second season. And since the comic book character was only dimly known to me, I’ve thoroughly enjoyed the show by not being previously familiar with the Arrow-verse.
Block IPDelete
Reply

The unfortunately problem I had with Arrow is that it made me interested in the comic books. Expecting the comic book reboot to be similar to the Arrow series, I was very disappointed. 😛 Joel sums it up very well by saying Arrow is a lot more Batman Begins.
Block IPDelete
Reply

Can I watch this show with my 6yo twin boys?
Block IPDelete
Reply

There’s some sexual stuff, not much. Mostly its just a ton of violence that I wouldnt want my kid to ingest.
EditDelete
Reply

I’ve caught a couple of recent episodes, and have nicknames for the characters like “the ugly one because she’s a nerd in glasses” and “I Can’t Believe It’s Not Harvey Dent.”

ICBINHD may be a completely legit character from the comic, but he still feels like a cheap knock-off.

I don’t think they ever even hinted that Felicity is ugly. She’s just awkward.
Less the teen movie girl who takes off her glasses before prom and is suddenly gorgeous, more more Golden Retriever puppy still tripping over its feet.
Block IPDelete
Reply

Well, it would if Golden Retriever puppies could make unintended sexual innuendos in about every sentences…

But yeah, it never occured to me she was supposed to be “ugly BECAUSE she is a nerd and wears glasses”. Personally, I think she’s cuter/sexier than Laurel.

I’m happy to hear the second season is good too, I was kinda afraid it would go downhill pretty quick.

The moment that hooked me on Arrow came pretty early; when Diggle started to suspect that this spoiled rich kid who kept disappearing on him was actually up to something – and then Oliver trusted him enough to let him in on his secret identity. If it were Smallville, Diggle would have actually seen him and recognized him – then he would have gotten hit on the head and conveniently forget. Seriously, everyone on that show was suffering massive head trauma, all so they could adhere to the bullshit “no tights, no flights” rule.
Block IPDelete
Reply

I do hate the CW app, but discovered (for the android version anyway), that if I closed the app as soon as a commercial started and reopened it and hit play again, I could skip commercials. That made it much more enjoyable than watching it on the computer which had no way whatsoever to skip them and had a tendency to play the same old navy commetcial four times in a row every single commercial break.
Block IPDelete
Reply

I was streaming from my iPad to the Apple TV via Airplay and found that every time it went to commercial, or rather tried to come BACK from commercial Airplay would quit and the CW app would glitch to where I could not restart the episode without first starting a different episode then going back to the episode I was watching (it only saved my place about 50% of the time) then restarting airplay. It was a fucking ordeal.
EditDelete
Reply