THE PREORDER IS OVER BUT YOU CAN STILL ORDER THE BOOK!

The pallet of over 1000 books arrived at my house on 3/3/11. Immediately I left for Seattle, got home and left again for Chicago. Shipping books is my #1 priority now that C2E2 is over and I don’t have another con for about a month.

All Non-Artist Regular Editions have been shipped. Regular Artist editions are shipping now as I sketch them (usually in bundles of 10 or so). Non-Artist-UFE’s will all be leaving within 1 week of this post. There was a hold up on one of the stickers, but now all the goodies are in and can head out to you. UFE Artist Editions will also be leaving as I sketch them. This may take a little while because I refuse to do the “30 second sketch” you get from a lot of cartoonists. I will take the time to make your sketch special, so please be patient and bear with me. Thanks!

If you order the book (regular or artist edition) now, it will ship based on the rules outlined above.

Check the links below to see some of the Artist Edition Sketches I have already shipped out.

UPDATE 4/11: All Regular Artist-Editions (save for a few special cases) have shipped.

END_OF_DOCUMENT_TOKEN_TO_BE_REPLACED

Tremble and feast your eyes skyward! Witness the horror! The sky has cracked wide! All manner of unspeakable evil escape its gaping maw! Also the HijiNKS ENSUE Book 2 Presale has started. So there’s that to look forward to.

You can pick up the book in 4 delicious flavors: Regular, Regular Artist Edition, Ultimate Fancy Edition and Ultimate Fancy Artist Edition. Other than conventions this will probably be your only chance to get a personalized and sketched book. You can also add a SUPREME ULTIMATE FANCY BASTARD Donation upgrade to your order if you would REALLY like to support HE and help with the astronomical costs of printing actual full color books on actual paper (we’re talking $8000 – $10,000 here). END_OF_DOCUMENT_TOKEN_TO_BE_REPLACED 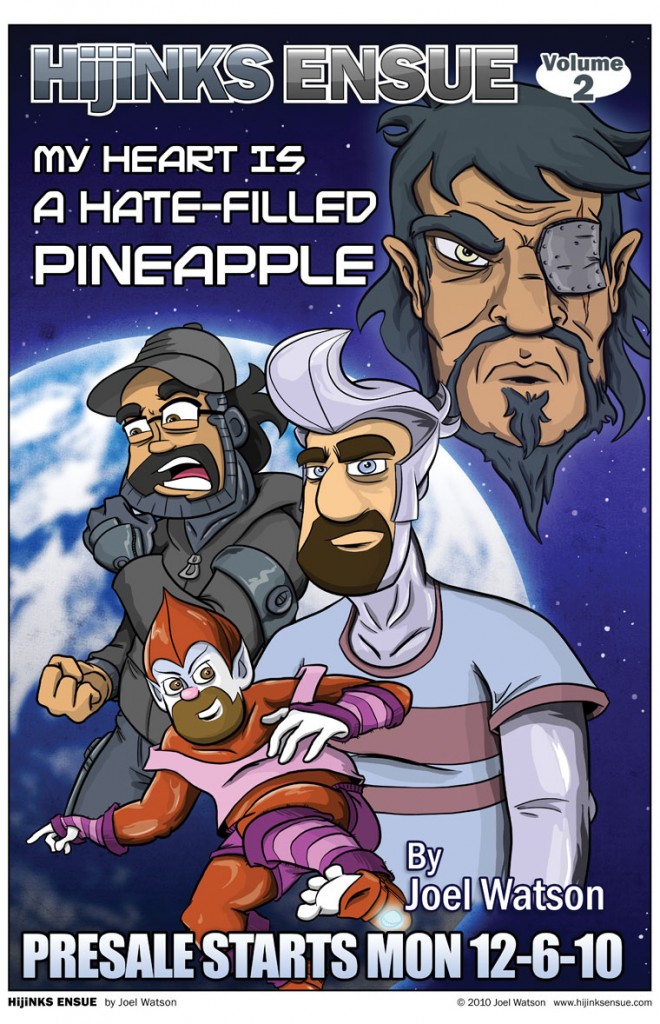 I had set aside today and tomorrow for drawing the cover to the next HijiNKS Ensue book, in hopes of putting up the presale next week. But so far I can’t settle on a name. This is a big deal because it determines what I will draw for the cover. Here are my current title contenders:

My wife and I have spent the last 72 hours furiously editing, correcting, rewriting and redrawing text and images for The Book (AVAILABLE FOR PREORDER NOW!). We’ve gotten an average of 3 hours of sleep a night for the past 3 nights, and

are each completely out of brain juice. Owning a 2 year old human that demands constant entertainment has further exacerbated this issue. The good news is the book files will leave my hard drive tonight and travel deep into the Canadian wilderness where enchanted moose and elk will gnaw the pages out of oak trees.

What I’m trying to say is THE BOOK IS FINALLY DONE! I am sending TransCon the files in a few hours, and it is such a freaking relief.

If all goes to plan (and it won’t), the books will be in my hands just before I leave for Baltimore Comic-Con on October, 8th (so hopefully I will have them at the con). They should start shipping as soon as I get back.

The stress of completing the book, coupled with my recent crippling back pain has made comic updates rather spotty for the past 2 weeks. For that I apologize and want to extend my deepest thanks to all of you for not giving me a hard time about it. This is my first book, and it’s been an incredibly difficult project. Now that it’s done I feel like things in the HEniverse can get back to normal.

There will be a new comic on Wednesday (9.9-09), and the normal M-W-F schedule will resume there after.

I can’t wait for you guys to see this book. I’m extraordinarily proud of it and I think you’re all really going to enjoy it.