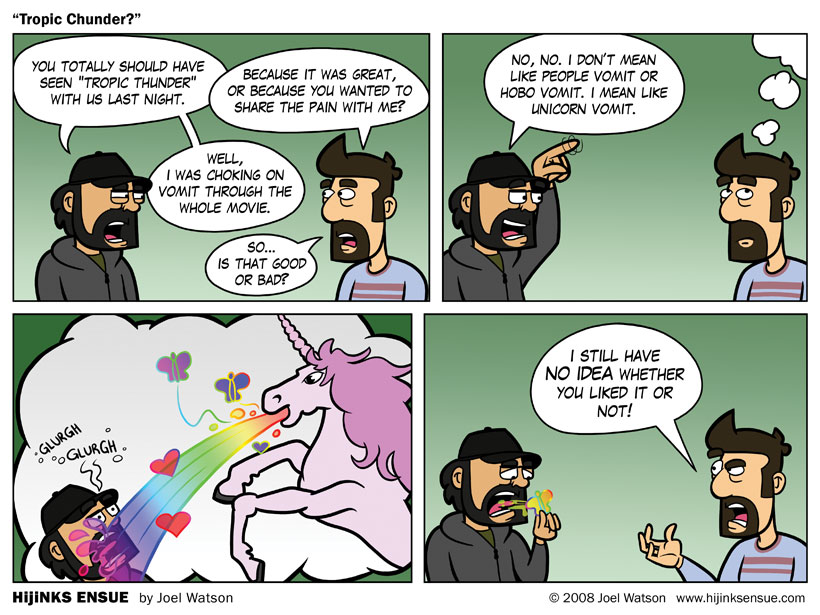 $10 says Mad Magazine or Cracked use that same title.

When I say that many of these comics are autobiographical, please believe me. For not one, not two, but three of my friends approached me with roughly the same review of “Tropic Thunder.” It just so happens they were the three featured regularly in HijiNKS Ensue. I hope when I have lunch with them later today I might actually learn if they thought it was a good movie.

Eli said basically what I portrayed in the panels above. He speaks in cryptic riddles and half truths. I think I’m supposed to find an amulet to decode what he tells me.

Denise was actually the one that suggested Eli might have been talking about “unicorn vomit” as opposed to his own, or someone else’s. Somehow, in her world, this suggests a shift from a negative connotation (throwing up in your own mouth) to a positive one (finding that there is mythical horned horse vomit in your mouth). As if the response to that discovery would be “Mmm, delightful!”

Denise also proposed that “Tropic Thunder” was made by 12 year olds with access to high explosives. Again, I think she meant this as a compliment to the film makers.

REMINDER: We will be Castcasting the HE Podcast tonight starting between 8pm and 9pm Central. Check out the live broadcast on Ustream.TV and join in on the live chat!

As of this post, Monthly Donation Subscriptions are at $400/mo and One Time Donations have reached $1897 since the beginning of The Experiment 4 months ago.

If the Monthly Subscription Donations can reach $1000 by the end of August, I can almost definitely continue the Experiment through September.

Thanks for your continued support!