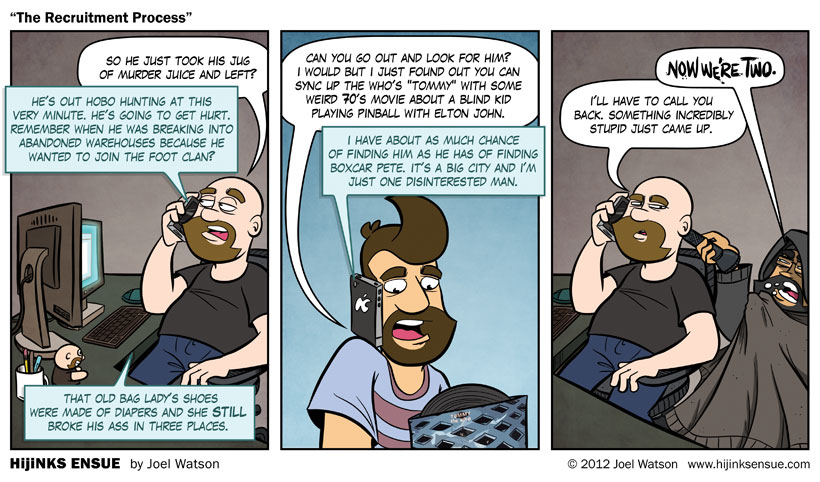 As soon as I wrote the words “hobo hunting” I got this blast from the Alternative Nation/120 Minutes past stuck in my brain hole. Now I am sharing it with you in the hopes that we will all perish together in the gorge of 90’s alt-rock insanity.

So today, one year to the day that my indoor air handler died and cost me $3000, my outdoor AC unit went kaput. It’s $5400 to replace it. It’s going to be 108+ degrees in my neck of the inferno called Texas for the next couple of weeks and living without AC is NOT an option. Any one time donations made in the month of August will be applied directly to the AC fund. If you would like to get something other than karma in return, expect a “HOLY FUCK $5400 FOR A NEW AC HEY MAYBE BUY SOME CUSTOM SKETCHES” announcement Monday.

Speaking of Fancy Sketches: I am finishing up the current batch of Fancy Sketch drive sketch cards and hope to mail them out next week. I’m really happy with how they are turning out and I’m putting some extra juice into them, so I hope those of you that ordered will feel your patience has been rewarded.

COMMENTERS: Has a friend ever tried to get you to tag along for a terrible idea? If you went along, was it because you were equally bad at decision making or you just wanted to keep them safe? Any close “if I would have gone, then I would have suffered horrible consequences too!” close calls? Why are your friends so dumb? Maybe get some less dumb friends.