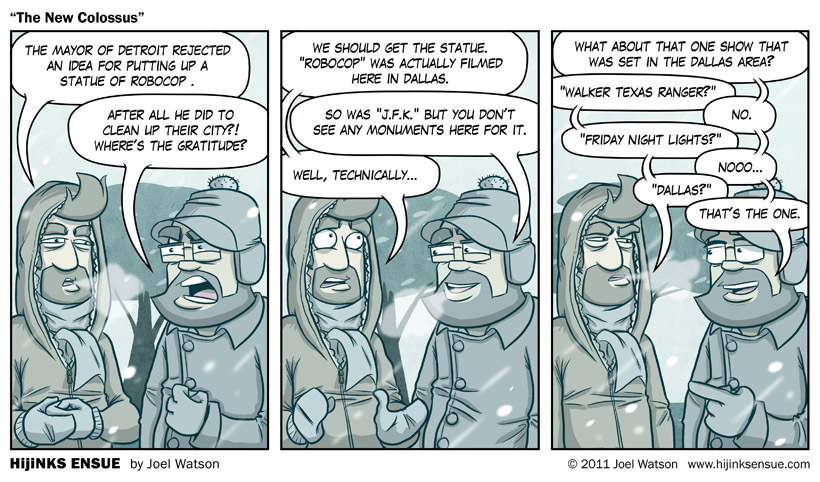 The Royal Geeks of The British Empire:
British Knights Shirts at Topatoco! 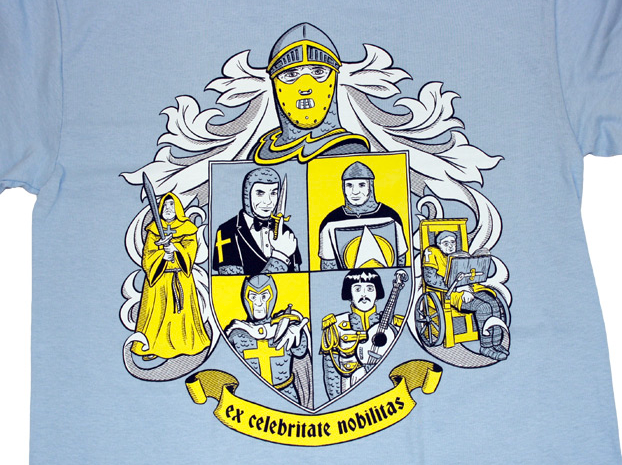 I think the Mayor of Detroit is being a little short-sighted in rejecting a statue of Robocop in his city. From what I can gather from alarmist headlines and hearsay, Detroit is an apocalyptic wasteland governed by packs of stray dogs. The “Mayor” serves at their pleasure and only in a ceremonial capacity. A statue of Robocop right in the middle of downtown would remind the looting and pillaging citizens of the possibility of a brighter tomorrow. A future where, if you commit a crime, a cyborg will shoot you with a machine gun. And what about jobs? Since American cars get 4 miles to the gallon and blow up if you so much as look at them, one can only assume the job situation in The Motor City is pretty dier. Instead of a simple statue, the Robocop tribute could be a full on RocoComplex! Imagine it!  A 400 ft. tall colossus straddling both halves of the city, with floor after floor of housing, government offices, shopping, parking garages, and a 40 story penthouse up in his helmet that overlooks the city from his visor. This could transform Detroit forever. Every day at Noon an Earth-shattering “FREEEEZE DIRRRT BAAAGGGG!” would bellow from his face, letting the city know it was safe from the canine menace below. Oh, yeah… once the people move into the RoboComplex, the wild dogs really start to tear shit up at street level.

Batman and Robin was also filmed here in Dallas. I propose a 40 ft. tall codpiece overlooking the arts district. Who do I talk to about this?

COMMENTERS: What other towns need statues based on their famous movies? How about a Lethal Weapon tribute in L.A.? It could say, “I’m getting to old for this shit,” in Latin under bronze busts of Riggs and Murtaugh. Or maybe a right outside of N.Y.C. and L.A. there can be a granite tribute to Snake Pliskin escaping each city. Personally I want to see a monument to the Ghostbusters bringing the Statue of Liberty to life in Ghostbusters 2 erected on Staten Island on top of the regular Statue of Liberty. Actually it should be just at the edge of Staten Island, stepping into the water. “Your love! Keeps liftin’ me! Your love is liftin’ me, HIGHER AND HIGH-ER!”

NEW IN THE VAULT: There are 9 new hi-res mobile wallpapers in the HE Vault. They are sized for iPhone Retina displays but will work nicely with any smartphone.
[click image to embiggen] 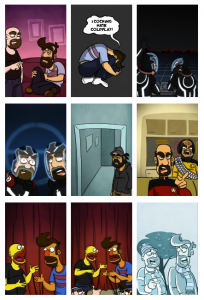