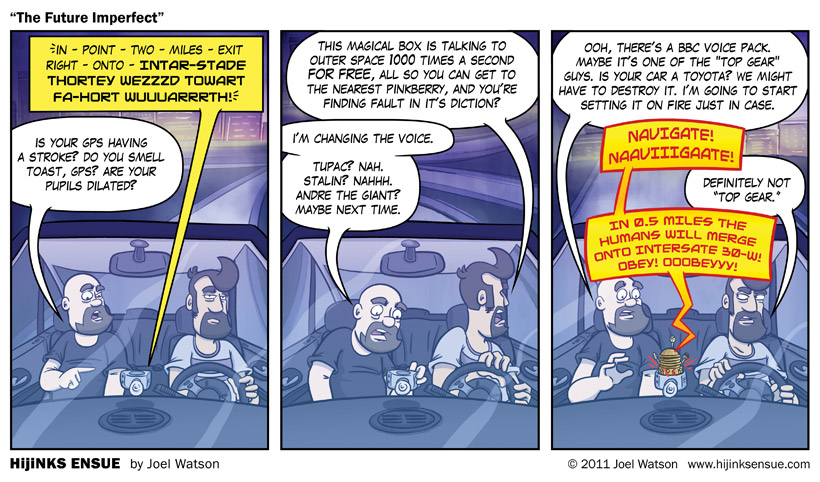 This weekend, on one of our rare, child-free nights my wife and I drove downtown to see Josh and his husband Jeff for dinner and movies. They live in a very nice neighborhood full of affluent types with fancy homes that just so happens to be about 40 feet away from the murdery, crack-rocky part of town. This is just how downtown Dallas is laid out and there’s no escaping it if that’s where you choose to hang your hat or your sack of rocks.

Due to the infrequency with which I visit this area, and my constant focus on not being murdered, I am unable to commit the directions to memory and thus employ a GPS to get me safely there. On the way the GPS said something very much like panel one above and I found myself mocking a machine’s elocution. A machine that knows exactly where I am, within 4 or 5 feet, because it can talk to 3 different satellite that are in space because we put them there with rocket ships. Is there a word that means “jaded by unfathomable privilege?” Because that’s what I am. Also, it should imply that I’m a terrible asshole for not being thankful each day and marveling at the wonders that surround me. Still, when my GPS says “parkway” it sounds like a Dutch exchange student. “Paaarqueaugh?”

Instead of a movie, we watched the first episode of Misfits. We all really liked it. Many of you Fancy Bastards have recommended it, so as soon as I can procure the rest of the series I will ploy through and make some comics about it. Oh, and if you don’t get the Top Gear reference, watch HERE.

COMMENTERS: What technological marvels do you find yourself taking for granted? What would be the best or worst voice for your GPS to have?