When I was still in high school, my mom and I had a 36″ JVC TV that I have gotten from the store I worked at for essentially nothing because the coax cable input had been broken off of it. I figured we would just tune channels with the VCR. When I it home, on a whim I stripped the coax coming from the wall and touched it to the bare terminal in the back of the TV where the coax connector USED to be. Low and behold there was picture! And sound! It was the late 90’s, so let’s assume it was one or more of the friends from Friends! I held it still while she brought me some electrical tape. I taped everything just so and delicately backed away from the TV, holding my breath. It worked perfectly for at least 2 years, until I tried to solder on a new coax connector and ruined it forever.

Many years later I spent 3 or 4 months building a small form factor PC into an NES case in order to use it for a HTPC. Finally I had the thing all button up and running smoothly. A specially ordered external power supply and two little fans kept it running cool, and you could plug actual NES controllers into the controller ports and use them (through an internal rewire that sent their pins to the proper parallel port pins) to control the AV software. I hooked it up to the TV with VGA and got ready to watch a downloaded copy of The Animatrix. And… ANNNNNNNND… nothing. Despite it 1ghz processor and 1gb of Ram (halfway decent for the early 2000’s), it was unable to decode compressed video due to it’s otherwise shitty specs. That thing is still in my closet. I have never used it for anything and I will NEVER part with it. I could probably rip everything out of it and just plop a Mac Mini right inside of it. Kids today don’t know how good they got it… in terms of putting computers inside of classic game consoles…

COMMENTERS: What was the most complicated or ghetto AV setup you’ve ever had or had to deal with?

Have you seen my wife’s geeky jewelry creations?

You can see her Tetris necklace below and more geeky goods in her shop! 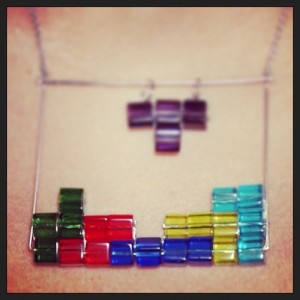 I recall in my student days that my friend’s house was covered in AV (multiple projectors, TVs, 5.1 sound systems, Xboxs, PS2s, DJ decks and the like). There was a mass of cables in the corner of the room, which to this day I’m sure you could see moving up and down as if it was breathing. I think if mouldy pizza was added to the mix, the first true instance of the Borg would have been created.

For a society fundraiser at college only last year, we had an outdoor cinema and all day gaming marathon. Two of us hung from the upper windows of one of the lecture buildings to tie a sheet of canvas up on the wall using spare lengths of ethernet cable. There was a little almost silent petrol generator running that we didn’t actually have to power anything with- the Xbox and PS3 were sat next to it to stay warm on a Welsh May night. The projector and soundsystem were entirely held together with duct tape and the scart ends were attached to the bare cables with crocodile clips. We had a barbecue, and played Halo 3, Unreal Tournament 3, Soul Calibur 4 and a pile of old Tekkens. Then we watched Stardust and The Last Crusade. It was an amazing night.
Block IPDelete
Reply

I have to say I busted out loud when I read the vacuum cleaner line! 😀

As for the comment question…
My family was in awe when they heard Super Mario Brothers being played through our home stereo for the first time. That game system was the original Nintendo System. 😉

When I first moved out with five other people, we had a jury-rigged nightmare of an AV set up that included some deluxe QUADROPHONIC speakers a roommate dug out of his parent’s basement, a giant over the shoulder video camera that was used as a VCR and for some reason also had to be turned on to use the N64. I didn’t then, and will never understand that mass of cables and switches.
Block IPDelete
Reply

I want to see pics of the nes/pc please!
Block IPDelete
Reply

I imagine it’d look something like this: http://www.toxel.com/wp-content/uploads/2009/04/c…
Block IPDelete
Reply

Mine is very close to that. I did have the CD tray coming out of the cartridge door. I mounted the two intake fans on the back, but otherwise it’s almost identical. I had seen a lot of them online and they were all so ugly. I made sure mine was super clean and incognito. As far as I know Im the only one that ever did the controller ports in the particular way that I did.
EditDelete
Reply

A buddy once bought an entire entertainment system at a yard sale. It worked great, for about a week.

After that it was a never ending series of workarounds just to keep it working. By the end he’d replaced so much of it there was barely any of the original remaining.

Being in a band in my teens we had a PA that we would hook up to the TV for movie nights with my bass amp as the crowning glory. We had to remove all the pictures from the walls as they would just fall off otherwise.
It would take us all day to transport and set it up at whoever’s house we were at, but that was half the fun.
Block IPDelete
Reply

Oh god. You just reminded me of all the ways my teenage bands used to try and rig PA systems. THe first was a computer mic plugged into the drummer’s CD player. We’d prop it up in on his chest of drawers so we could almost sort of hear it. Eventually I blew both of his speakers. Later the bass player bought a 35watt radioshack power amp (used for CB radio I believe) and a car subwoofer box with 2 12″s in it. We have a shitty mic that I’d permanently borrowed from church and that lasted maybe 6 months. It was all feedback and screeching all the time. When I was 15 or 16 we all chipped in and got a halfway decent starter PA with a 100 watt Peavey head and 2 Gemeni (cheap DJ club brand) 15″s with horns. We were the envy of every other shitty teen band… until we broke up and had to figure out who actually owned the equipment. NEVER NEVER NEVER own gear with band mates. I should also mention that my mic stand was a PVC pipe stuck in a 20 lb lifting weight all wrapped in black electrical tape.
EditDelete
Reply

…and when I was a student there was a wall near my flat painted white. The people opposite would put a projector in the upstairs window and the whole neighbourhood wood bring chairs and even sofas to watch the movie.
You can see it here http://goo.gl/maps/TolzI
Block IPDelete
Reply

The oddest setup I had most recently was when I rebuilt my PC as a media center. I got sick of looking around my monitor to see the TV so in went a TV/FM tuner card and out went the TV. I connected my satellite set top box for TV and occasionally plugged the VCR in to watch either of my 2 remaining tapes. I tried hooking up my ps1 to play games but the lag was godawful. I also put in a blu ray drive and attached a 5.1 surround system via optical output from the soundcard. I had the middle and front right and left on my desk below my screen and the 2 rear ones mounted on poles behind my desk chair for full audio immersion. I tested it with the season 3 episode of BSG where they attacked New Caprica. I miss that setup.
Block IPDelete
Reply

I find every single part of your NES build to be amazing. AMAZING!
Block IPDelete
Reply

I should really dig it out and post some pics. I probably have the “WIP” pics on my file server.
EditDelete
Reply

Hey Joel, what happened to the alt text button? I can’t view the mouse-over text from my tablet anymore. It makes me sad. And I read your comics to bring myself joy. 🙂
Block IPDelete
Reply

Ah. Well now I feel silly. Thanks for the reply though. 🙂
Block IPDelete
Reply

My parents own and use a TV older than I am. I am 25. I’ve been keeping that running for some time.
Block IPDelete
Reply

I CALLED IT! RETURN OF DENISE! I missed seeing her in the comic!
Block IPDelete
Reply

Posted in Uncategorized and tagged beer, electronics, home theater, Storyline: Who Is Your Daddy And What Does He Do?, tech.