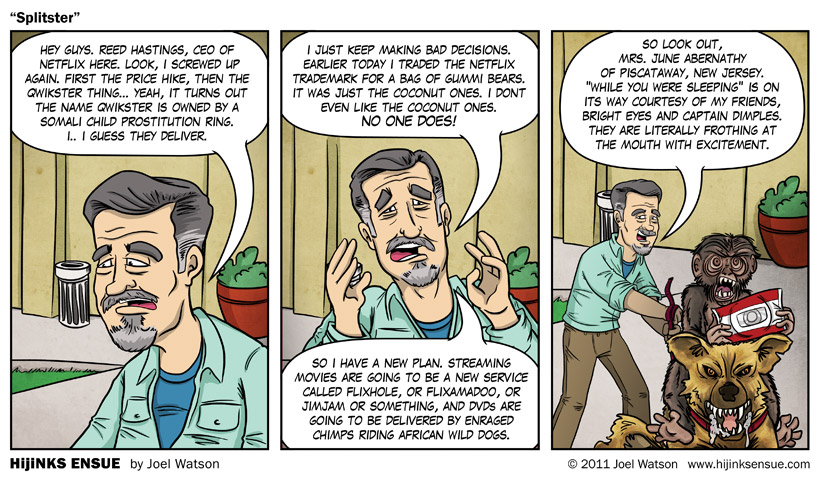 Reed Hastings seems like a made up CEO name. Like someone that moves to Hollywood and changes their name to Selby Feingold to Rock Explosionhole or somehting. I feel like this guy has the right idea in wanting to hedge his bets that streaming will overtake physical media for movie distribution in the coming years, but his decision to split Netflix into two companies (thus raising prices, and confusion for customers) is definitely shortsighted. The real problem for me is that neither side of Netflix, streaming or DVDs by mail, was really worth my money. It was the combination of both services for one price that made it worth while. I only take one physical DVD from them maybe ever 6-8 weeks and I only watch 4-5 streaming shows a month (most of which are for my daughter). All of that in total was worth the $9 I was paying. Of course now that fee is $16 and soon it will be split between two sites with two logins and two different credit card charges. I’m not entirely sure what the fee breakdown is going to be when the dust settles, but I have a feeling I will be far less enthusiastic about keeping both services, which in turn will make me less likely to keep either.

Unless Netflix come out in the next couple of months with some KILLER content deals, I don’t see me sticking around for that long. They are going to need something along the lines of EVERY major hollywood release available for streaming no more than 30 days after the DVD hits stores to keep their product viable. Something tells me that isn’t going to happen anytime soon. The only thing that makes me hesitate abandoning them in favor of other streaming sites and RedBox is the back catalog. If I really want to see The Last Starfighter and I don’t already own it, Netf… Qwikster is going to be my only legitimate option… unless that movie is already on streaming. I haven’t checked.

I think Hastings needs to integrate his “divide to accommodate” strategy into every aspect of his life. “Hey kids, from now on the person known as ‘Dad’ is going to split into two entities. ‘Dad’ will still be around if you need advice on dating, or help with your homework, but when you step out of line, don’t clean your room or break curfew you are going to have to answer with ‘THE PAIN HAMMER.’ Remember, ‘Dad’ will always love you and be there for you, but ‘THE PAIN HAMMER’ is going to crush you.

COMMENTERS: What other changes or alternative delivery methods could Qwikster implement to grab our attention? What other companies or institutions could be broken up into smaller, more confusing entities? Perhaps “The Post Office” will still sell stamps and envelopes, but if you actually want to mail something you have to deal with “BlergBlorg,” the Internet startup that consists of mail trucks that randomly drive around major US cities collecting mail from people lucky enough to find them. Also, who already owns the Twitter names of the new companies? @BlergBlorg belong to a convicted sea lion rapist.

Serious question: If you have Netflix, are you going to keep both services? Just one? Neither? Why?