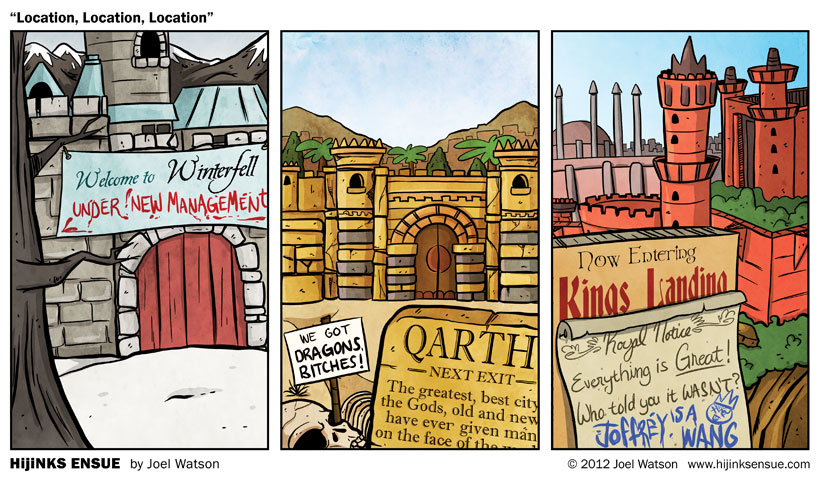 The first mini-story arc is over. There are going to be a couple of stand alone gag comics before the next bit of continuity starts. Read more about the new direction I am taking the comic in and how you can help HERE if you haven’t already.

Who would have known Sean Hannity was decended from the Qartheen?

Game Of Thrones basically boils down to matters of real estate. Everyone wants to be their own, as well as everyone else’s, landlord. The desire to collect rent AND not pay it are the only real driving forces behind those seeking power in Westeros. Well, that and sex. Everyone does seem to enjoy a healthy bit of boot-knockery. Everyone except Jon Snow, that is. I bet even Hodor has a romantic trist with a wine barrel or a dresser every now and then. A giant has needs. Hodor (Hodor).

A few notes about Season 2 of Game Of Thrones: A couple of episodes back when Tyrion slapped Joffrey and delivered the line, “And now I have struck a king. Did my hand fall from my wrist?!” I ran out into the street and slapped the shit out of the first privileged blond boy I could find. Stop seducing me, Peter Dinklage! I am a married man (call me)! Is the richest guy in Qarth named Count Duckula Ducksauce? It sure sounds like that’s what he’s saying. Don’t tell me if that isn’t his name. For next season, they either need twice as many episodes or to kill all of the characters twice as fast. As it is, each of the 11 storylines only get a few minutes of screen time a week, which is INCREDIBLY frustrating. I miss Ned.

Now, I’m going to go draw a bath, pour myself a glass of wine and watch a 4 hour loop of Tyrion slapping Joffrey. I’ll probably light some candles.

COMMENTERS: Please make your own “Welcome To…” or other tourism-type slogan for you favorite or least favorite fictional city, village, planet, dimension, etc.