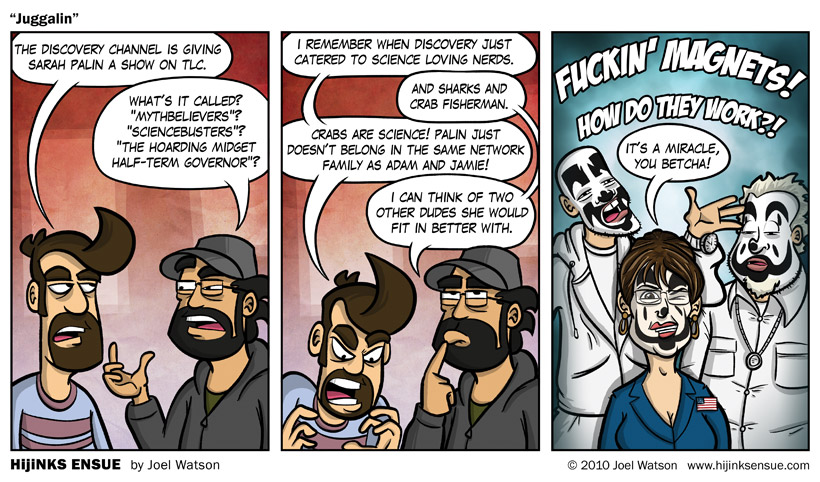 One can only assume that Sarah Palin’s Alaska on TLC will involve the former governor pushing pregnant moose down a flight of stairs, slitting the throats of brown bear cubs with a javalin while racing a snow mobile and clubbing baby Eskimos. Their precious pelts are worth their weight in endangered whale blubber at the trading outpost.

If you are a Juggalo sympathizer of some sort or your tea bag swings to the extremely far right and this comic offends you, please address all concerns to Randy since he inspired this comic over dinner (and via twitter).

It seems like this has been a banner week for enemies of science, champions of ignorance and the glorification of all around, good old-fashioned dullardry. I actually think Palin fits right in with ICP. Much like her Juggalo kindred [and the ancient Aztecs] she doesn’t know how the sun works, doesn’t want to know and is pretty sure she should fear it and sacrifice a few of her brood to insure a bountiful harvest.

If we can learn anything from the “Juggalin” or “Paliggalo” philosophies, it’s that scientists are “snake oil salesman” and “mother fuckers” that be “lyin’ and gettin’ me pissed“. At least we can all agree that nothing in this world or beyond can be explained without magic. To attempt to fathom how rainbows are made, why our kids look like us, or how dirt is dirt is to question the will of the divine and drive a stake into the heart of all those that believe in miracles.