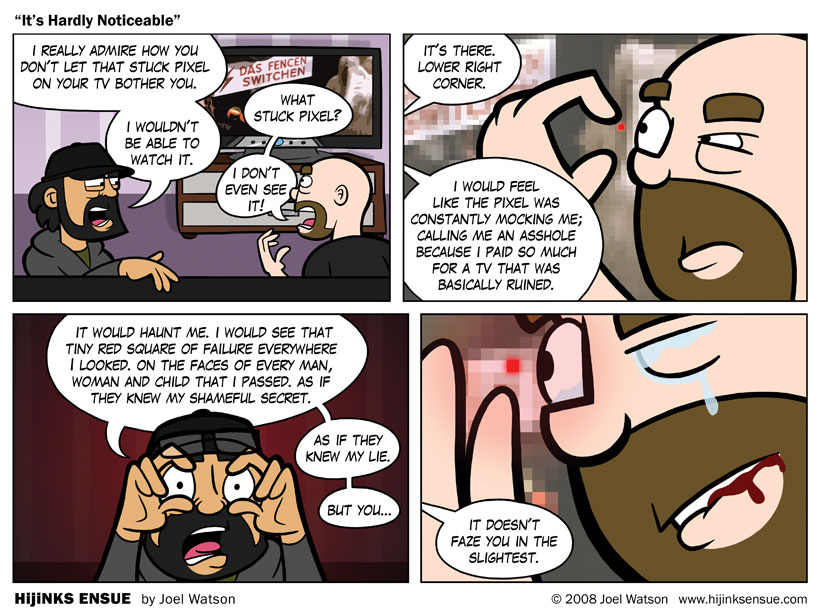 This comic is a combination of the problems Josh and I had this weekend. Josh, for the first time ever, tried to use the HDMI cable connection on the 50″ 1080P Samsung LCD TV he bought over a year ago and realized it had probably been fucked all along. I actually had a dead pixel on my Wacom Cintiq drawing tablet (which is basically a small monitor that you draw on with a pen stylus).

I did some research on how to fix dead or “stuck” pixels and the options ranged from easy to adventurous. The scary method involved using a screw driver and a rag to “massage” the pixel back into working order. No joke. I’m sure if that didn’t work I would be advised to “caress” it with a brick wrapped in newspaper. Luckily, the simple option was to run a Java applet that flashed every color in the rainbow on and off 100 times a second, which worked splendidly. The seizures it produced were spectacular, though I regret biting off my tongue as that I used it frequently to speak and enjoy ice cream.

Things to look out for this week:

If you’ve ordered a personal Avatar from The Store, I should be completing them this week. If you’ve already ordered a Print you should be receiving it shortly. Feel free to send in pics of you and your print (or shirt or desktop) to comics(at)hijinksensue.com. I’ll post them on Flickr!

Posted in Uncategorized and tagged tech.